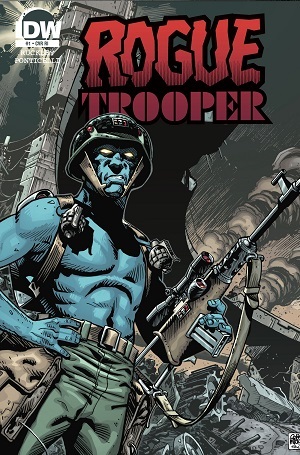 Rogue Trooper is an ongoing science-fiction strip created by Gerry Finley-Day and Dave Gibbons in the British comic 2000 AD and first published in 1981.

Against a backdrop of a future war between two factions, the noble Southers and evil Norts, the comic follows Rogue, a G.I. (Genetic Infantryman), and his three comrades' search for the Traitor General, a man in the Souther high command who sold the Southers' battle plans to the Norts, which led to the massacre of all the GIs except Rogue. His comrades are in the form of biochips (onto which a G.I.'s entire personality is downloaded at the time of death for later retrieval) and are named Gunnar (mounted on Rogue's rifle), Bagman (on his backpack) and Helm (on his helmet).

After about three years, Rogue finally found and killed the Traitor General. He was again inducted into the Souther army, but then (without a major goal), the comic floundered and ultimately sputtered out.

Gibbons returned to the strip in 1990, this time as a writer. He completely rebooted the series with a new character, new war, and new planet. The biochips were done away with, since Gibbons wanted the new protagonist—Friday—to have a more spiritual connection with his comrades. However, the story was basically the same: all but one of the GIs are wiped out in a massacre, and the one survivor goes rogue and treks back to the high command to find out what happened.

Gibbons' run was short but well acclaimed. It was pretty self-contained, though left the door open for future stories. After his run ended, Michael Fleisher picked it up and had a new set of adventures as Friday wandered Nu Earth trying to do justice where he could. This run reintroduced the biochips, which—to Gibbons' chagrin—turned out to be the most popular aspect of the Rogue continuity.

Steve White took up the writing after Fleisher, and in order to regain interest, he had Friday team up with Rogue, who now existed in the same universe. This move was not well received due to continuity issues and some rather controversial plot points.

The series was supposedly ended for good in 1996, though there was the odd spinoff or two. In 2002, popular writer Gordon Rennie revisited the Rogue continuity with a new series of stories set during the hunt for the Traitor General. This series was well received, and Rennie attempted to reboot the continuity for a second time, but his editors blocked him. He has said he would like to write more stories in the Rogue Trooper universe, but these would focus on side characters and what's going on elsewhere on Nu Earth. Rennie would later create The 86ers, based in the same universe, but in a different star system, and Jaegir, focusing on the Norts.

Most recently, the comic was adapted into a video game by Rebellion Developments, who currently also publish 2000 AD and have the rights to most of its characters. Rogue Trooper: Quartz Zone Massacre was released on the PS2, Xbox 360, and PC in 2006, and again on the Wii in 2009. Though it features the characters and premise of the Rogue continuity, the story is very different, and much of the technology has been altered to make the game play "more fun."

A film adaptation is in the works

with Duncan Jones set to direct.