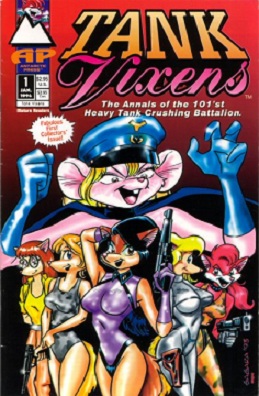 Tank Vixens (whose Working Title was Lesbian Foxes In Hovertanks) is a Furry Comic and a striking example of Porn with Plot. Not so much porn as page after page after entire comic of furry fanservice. You see, in this universe, people fight wars with... FASHION! Well, not so much fashion as fashion-based warfare, which often has the characters running around topless or completely naked. By using 'pose power' the vixens 'can make wimpy male opponents wither, flee or have aneurisms and die.' If that doesn't work then they finish them off with good old fashion ass kicking and heavy firepower. The story focuses on the attempts of the Vole Imperium, a fascist empire, out to conquer the galaxy, and the actions of the Pan Vulpine Coalition to stop them. Centering around main characters Firen Prissy and her lesbian lover Sonya Guildencratz, it follows of the actions of the 101st Tank Crushing Battalion, an armor battalion consisting entirely of lesbian foxes, who are typically all crazy to an extreme that only a comic book could support. The battles are far from conventional tank engagements, as the major of the VIMPs, Udda Von Schteppenschlammer and her secretary, Hilda, face off with the vixens in posing contests, the more racy the better.

The series (and spin-off card game) contains examples of: