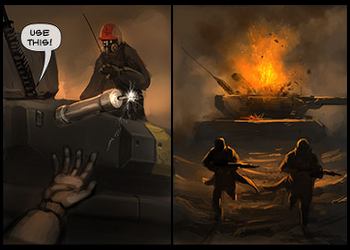 It's dangerous to go alone! Take this!
"My comrades tied a rope around my waist and lowered me on top of Nazi tanks. I'd stuff Molotovs under turret and cannon, and they pulled me up again. Eight years old! They called me Tank Boy. I took a lot of Nazi tanks. A lot."
— Commander Daskal, The Beast of War
Advertisement:

This is where a tank is on the battlefield and the main protagonists have either used up all their anti-tank weapons or never had any to begin with.

You run up to the tank (hopefully nobody sees you), jump on, kill the guy looking out of the hatch or open the hatch (it's never locked — just in case the crew does need to get out fast) and then toss down a few grenades before jumping clear of the resulting explosion. Often that last part of the plan doesn't work, making it a Heroic Sacrifice. Given that tank armor is usually tougher than grenade explosions, the effect is usually to reduce the crew inside to the consistency of chunky salsa.

Should be noted that this was more or less the original use of the Molotov Cocktail. In that case, though, you threw them onto the back deck in the hope that the burning gasoline would enter the engine compartment through the air intakes.

Fact of the matter is that second-generation (produced in the 1970-80s) "main battle tanks" can't be damaged from the outside by anything other than dedicated anti-tank weaponry, and earlier medium- and heavy-tanks could only be disabled or damaged by improvised weapons. Less heavily-armored vehicles such as light tanks and armored transports are, however, still vulnerable.

For blowing up organic enemies in a similar fashion, see Feed It a Bomb.

Daryl inserts a grenade down a tank's barrel, blowing it up and forcing its operator to abandon it.

Daryl inserts a grenade down a tank's barrel, blowing it up and forcing its operator to abandon it.