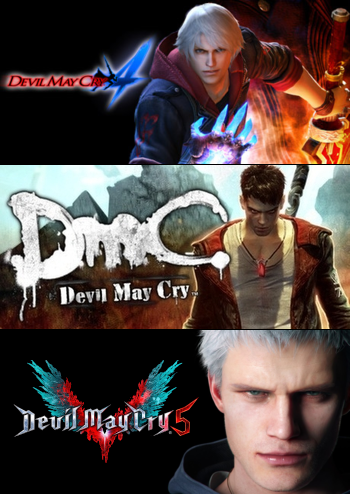 Out with the new, back with the old.
So, you have a classic film or series that is beloved by an entire generation. It has great critical acclaim, broke all sorts of box office records, and has a massively loyal and devoted fanbase. However, several years have now passed and someone decides that a remake of it is a good way to cash in on its success. By updating for a modern audience and adding references to the original, it seems like it could be successful.
Advertisement:

Maybe the reboot doesn't quite work, proving to be an Audience-Alienating Premise to fans of the original and new viewers just aren't interested (again, for the same reasons). Perhaps the reboot is warmly received, but fans still want more from the original timeline. So, how do you rectify the situation?

A sequel set in the same continuity that goes back to the roots of the original, while forgetting the remake ever happened. You bring back the original cast and continue the story while making loving Continuity Nods to truly tap into nostalgia.

Forms of this include: