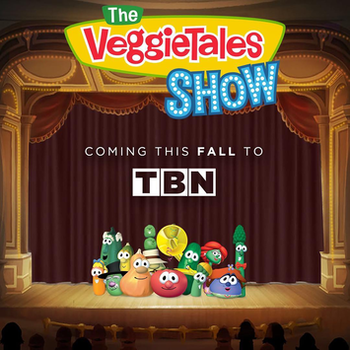 "Have we got a show for you!"
The VeggieTales Show is a revival and Spin-Off of VeggieTales. It premiered on DVD on October 22, 2019.
Advertisement:

The series features Bob the Tomato, Larry the Cucumber and their friends venturing out of the kitchen countertop once again to host the show in a theater owned by Mr. Nezzer as they use it to tell stories in the form of plays in front of a live audience.

The first season will consist of 18 episodes

with the series premiere being a new Christmas special

The series is produced by TBN in conjunction with Universal. Episodes frequently release on TBN's streaming service, Yippee.