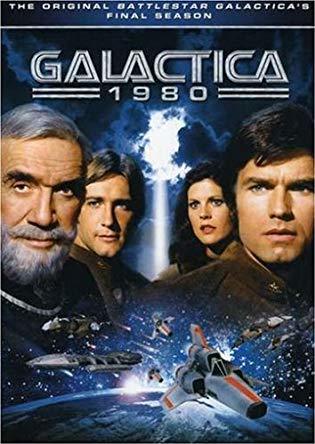 Galactica 1980 is a sequel/spinoff of Battlestar Galactica (1978). It features Edutainment Show elements, as mandated by the early Sunday evening timeslot ABC transferred the show to.

The Galactica and its fleet finally reached Earth, only to be forced to pass it by to lead the Cylons away. Meanwhile, Troy (Boxey, now an adult) and his wingman Dillon were left on Earth (soon joined by the "Super Scouts", a group of Colonial children stranded by accident), on a mission to uplift Earth science to Colonial standards while maintaining a Masquerade to avoid drawing Cylon attention.

Although the series is generally not nearly as well-regarded as its predecessor, Battlestar Galactica (1978) Expanded Universe materials have frequently imported selected elements of it, like Boxey going by the name Troy when he grows up (in the 1990s-2000s novel series), or the sympathetic Cylon "Cyrus" (in a comic book adaptation). Dynamite Comics actually produced a Galactica 1980 comic book series, featuring Doctor Zee and other elements from the show, but involving a divergent timeline created by time travel.

The United States Air Force stopped investigating UFOs in 1969. After 22 years, they found no evidence of extra-terrestrial visits and no threat to national security.