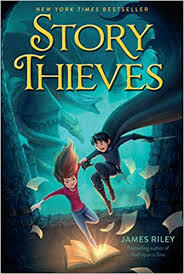 Be More Fictional
Story Thieves is a book series by James Riley, author of the series Half Upon a Time. It chronicles the adventures of Owen Conners and his half-fictional friend Bethany Sanderson as they travel through fictional worlds in search of Bethany's father who went missing when she was four. In the process, the two friends come across and befriend many fictional people and discover a plot to separate the fictional and non-fictional worlds by removing non-fictional people's imagination. The series consists of five books.
Advertisement:
Advertisement: