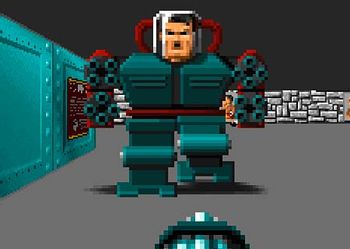 While no such thing would actually happen without serious alterations to the personalities of Adolf Hitler and most of the German high command, note their Air Ministry, the RLM, in particular had roughly the same attitude towards research projects that a magpie would have in a tinfoil factory, there is some historical precedent. Nazi Germany was the first to create practical versions of numerous weapons and progressed enough in rocketry to injure or kill almost 100,000 British people with a few thousand rockets, and, courtesy of the USA's Operation Paperclip, earned nearly two thousand German scientists (such as Wernher Von Braun) free passports to the US once the war was over along with immunity from prosecution for extensively using slave labour and working thousands of them to death. Many late-war experimental weapons were touted as Wunderwaffen

Despite this reputation for producing very sophisticated weapons and equipment, the reality was that most Nazi super-weapons were incredibly expensive and in the vast majority of cases totally impractical. Moreover, many of them were also less refined and efficient ("advanced") than the experimental devices being tested in the outside world. For example, jetpack technology itself wasn't rendered workable until 1958 and, without an alternative fuel source, still remains impractical today. Many of the super-heavy tank designs Germany came up with in the later years of the war were extremely large and slow, too expensive to build and operate in numbers, and could still be destroyed or disabled by conventional weaponry. Infantry weapons like the FG-42 or STG-44 made use of concepts that were ahead of their time, but their actual performance was spotty due to unreliable manufacturing circumstances and unresolved design flaws from rushed development, negating any advantages they had in the first place. Arthur C. Clarke's short story "Superiority"

It is worth mention, that contrary to the popular opinion of "Nazis got all the cool toys", other participants of World War 2 had their own advanced weapon programs - actually, often more advanced than Germany's. The United States, for example, by the end of the war, had working radar-homing and infrared-homing guided bombs (Germany wasn't able to venture past simple radio controlled weapons that were still guided by human hand and eye), torpedo-carrying assault drones with TV cameras, and multiple other examples. Britain created incredibly sophisticated automatic radio guidance systems for bombers and experimented with surface-to-air and air-to-air missiles. The Soviet Union had full-scale radio-controlled tanks with flamethrowers and pilotless motor torpedo boats even before the war. Even Italy and Japan, often assumed as "less technologically advanced" participants, had their own guided weapons designed and tested.

Ironically, Germany's focus on "wonder weapons" late in the war stemmed from its precarious strategic position, which was so dire (and self-inflicted) that only the notion of some crazy, weird, yet actually successful miracle of a weapon was seen as a viable hope for Nazi Germany's continued existence. And since the actual resources, industry, manpower, and time needed to actually produce any such wonder weapons in significant numbers was insufficient long before the writing was clearly on the wall (and getting ever worse), the diversion of precious resources and industry to these projects just hastened their defeat. Indeed, Freeman Dyson, one of the major scientists for the Allies, called the V-2 missile project so militarily counter-productive that "The V-2 program was almost as good as if Hitler had adopted a policy of unilateral disarmament." In a further twist of irony, many scientists who were driven out of Europe by the Third Reich's discriminatory policies went to work on the Manhattan Project, which produced what is arguably the only true wonder weapon of the war.

Nonetheless, if you have to pick one WWII power to which to give antigravity and a moonbase, the choice is obvious; after all, it's boring if the good guys have all the toys. Not to mention that Einstein (though a pacifist and a Jew, so hardly on Hitler's Christmas card list) was German (and there are a lot of rumors that the reason why America wanted nuclear power fast is that they thought Nazi Germany would develop it first), and Tesla, although actually Serbo-Croatian (a Slav, so a member of another of Hitler's exterminate-on-sight groups), is frequently confused with this due to the country being part of the Austrian Empire when he was born. Needless to say, the theme is played upon endlessly in pulp callbacks, B-movies, and modern occult works.

The main antagonists of "Secret Weapons Over Normandy", the Nemesis Squadron, succeed in not only producing a long-range bomber capable of hitting the US, but also manage to come close and ultimately develop an atomic bomb. Both are something the real-life Nazi Germany could only dream of ever mass producing or even creating, respectively.

The main antagonists of "Secret Weapons Over Normandy", the Nemesis Squadron, succeed in not only producing a long-range bomber capable of hitting the US, but also manage to come close and ultimately develop an atomic bomb. Both are something the real-life Nazi Germany could only dream of ever mass producing or even creating, respectively.