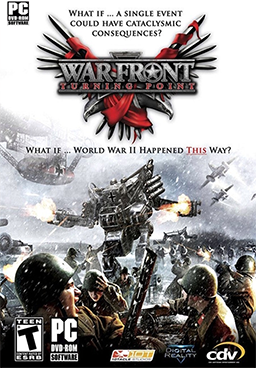 Yes, you're seeing this correctly. A Humongous Mecha in a World War II Game.
Advertisement:

War Front: Turning Point is a 2007 PC Real-Time Strategy game developed by Digital Reality. The story utilises a What If? scenario where Hitler gets assassinated earlier than usual, somehow allowing technology to advance ahead of schedule, and giving the Allies, Germans and Russians some frankly insane weapons ranging from tanks with freeze rays to pre-modern era stealth bombers to that very Humongous Mecha that you see proudly displayed on the cover.

All right, put your hands down, let's not jump to conclusions: this game is actually more like Generals than Red Alert in all honesty, and for the uncanny resemblance, it has most certainly been criticised for that. There is one unique feature, though! You can hop into any defensive turret and control it in first person mode! Or...you could just allow the auto-aiming to do it for you and not murder your pc's graphics card with the choppy framerate.

Has a patch if you're going to run it with Windows 7.