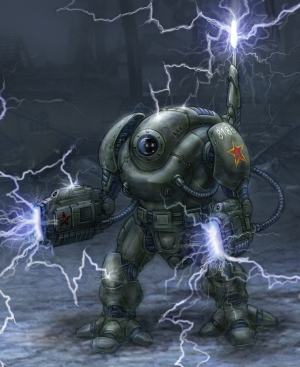 Resistance Is Futile, Capitalist Pig-Dog!
"We are fifty or a hundred years behind the advanced countries. We must make good this distance in ten years. Either we do it, or they will crush us."
— Josef Stalin, 1931note Ten years later, the Nazis invaded.
Advertisement:

The tendency to give those Dirty Commies technologies far beyond their Western counterparts in Cold War or futuristic settings. (Not that the U.S. is left out, as long as both sides are in a Lensman Arms Race.) Expect lots of Nikola Tesla technology and I Love Nuclear Power.

Something of a Discredited Trope and usually only played for laughs. After the end of the Cold War, "abandoned Soviet experiments" was frequently used to Hand Wave the continued appearance of menacing communist super-weapons in a world that suddenly had fewer communists.

It is worth noting that historically the most recognizable disciplines of any superscience — genetics and cybernetics — received a poor start in the U.S.S.R. as the Party proclaimed those "false sciences" for being "bourgeois" (which makes as much sense as Nazis dismissing Einsteinian relativity and the modern theory of the atom as "Jewish physics"). This stance wouldn't be lifted until Nikita Khrushchev took power and U.S.S.R.'s first computer was finished in the mid-1950s.

and contributed immensely to theoretical physics (there were several Soviet Nobel laureates in physics, including Andrei Sakharov and Lev Landau, and the Landau-Lifshitz textbooks on theoretical physics still remain among the best) — and also laughable failures, such as Lysenkoism

and the abuse of psychiatry for "rehabilitation" purposes

, yet fell behind in steel manufacturing, despite experimenting with it the longest. The Soviets, however, loved nuclear power — the world's first nuclear power plant to generate electricity for a power grid went online in the U.S.S.R. (too bad the Chernobyl accident ruined that reputation). Thus, this trope certainly has some basis in fact. Of course, the inconsistencies can be handwaved by the means of an Alternate Universe, as Command & Conquer: Red Alert testifies.

Historically, this trope owes itself to the Soviet Union's relative international isolation, both self-imposed and external, secrecy (especially about anything military, and a lot of Soviet research was fully or partly military-related) and tendency of its enemies to assume the worst with the absence of information. In the broadest sense, historians of sciencenote distinct from the history of arts and humanities, termed the history of scholarship have concluded that even considering the destructive consequences of Lysenkoism and obstacles to publishing research, dialectical materialism

— the philosophy that predates contemporary Marxism and serves as its scientific "foundation" — had an overall positive influence on scientific community of the U.S.S.R. and the world as a whole. Science is certainly a thing with acknowledge-able accomplishments attributed to the state, but it's a far cry from the entertaining medium of Soviet superscience.

The common idea nowadays is that The New Russia won't be able to have anything vastly superior for awhile either due to economic problems and lack of funding, or the resulting lack of personnel. While there is some truth in this, Russia is still a huge industrially developed nation more-or-less tied with Germany as the largest economy in Europe, so it might be able to keep up though, which is largely what the Soviet Union did. The fall of the Soviet Union is often used as a reason why long-abandoned Soviet Superscience is once again rearing its ugly head, it having been forgotten about, lost in the confusion or sold off by corrupt handlers in the post-Soviet restructuring of Russian society. Admittedly, the same story was used by many a charlatan in Russia as well.

This trope is a form of Historical Villain Upgrade if the Soviets are portrayed as villains in the story.

Stupid Jetpack Hitler is a Sister Trope, giving Those Wacky Nazis things like Powered Armor and Cool Airships, while Ghostapo could be a "cousin trope", in that it's a more mystical version of Stupid Jetpack Hitler. May be part of a Tesla Tech Timeline as Tesla tech has a sufficiently different aesthetic to the capitalist pigdogs' technology. All of these are culture-specific sub-disciplines of Mad Science. See also Closed Cities, which is where Soviet Superscience is created; they range from ordinary cities declared off-limits to foreigners to full-fledged Black Mesa-style complexes hidden in the lost mountains of Siberia.