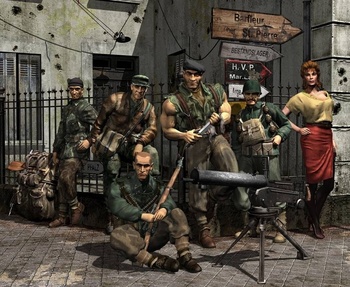 Don't mess with these guys. Oh, and keep yourself away from that girl as well.

Commandos is a Real-Time Strategy Stealth-Based Game franchise set in World War II, by Spanish game developer Pyro Studios. In each game of the series, the player commands an elite squad of Allied soldiers/spies and tries to accomplish various kinds of missions behind enemy lines - ideally without getting caught and/or killed by Axis troops.

The main games in the series:

Pyro also released a FPS Spin-Off based on the game called Commandos: Strike Force in 2006, but due to its Unexpected Gameplay Change, it's been dismissed by many fans of the series, and eventually even by Pyro themselves.

Speaking of fans, the Game Mod Commandos 2: Destination Paris includes all of the original games' missions playable with the gameplay of Commandos 2: Men of Courage, and spices up difficulty. All tropes specific to this mod should go on its page.

In July 2018, Kalypso Media, publisher of Tropico, acquired the rights to the IP, with plans to develop 'completely new games.' The first of their new releases is Commandos 2 - HD Remaster, a remaster of Men of Courage released the 24th January of 2020 with console ports on the 18th of September 2020.

Also of interest, is Shadow Tactics: Blades of the Shogun, a Spiritual Successor by Daedalic Entertainment attempting to revive the gameplay style of Commandos, but swapping the World War II setting for the Jidaigeki.

open/close all folders
Main games
last level), and an extract of the bombing of the Shinano cutscene.
Commandos: Strike Force