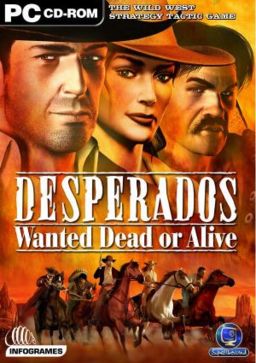 Desperados: Wanted Dead or Alive is a Real-Time Strategy Stealth-Based Game developed by Spellbound, and can be described as Commandos meets The Magnificent Seven.

The story starts a little after the Civil War, in New Mexico, where the train robberies have gotten out of control. Naturally, the local Railroad Baron, Mr. Smith, wants something to be done about it, and the bounty hunter by a name of John Cooper decides to take the job, taking the short trip to Louisiana to recruit (or rather, save their asses from whatever trouble they gotten themselves into) his old partners Sam Williams, Doc McCoy and Kate O'Hara. After convincing the rather uncooperative Marshall to tell them who's responsible for the train robberies, they set off to collect bounty on one Pablo Sanchez, the leader of a local gang. However things are hardly that simple...

The game has two less popular and not as well-received sequels, Desperados 2: Cooper's Revenge, and Helldorado. A fourth entry, Desperados III, was revealed in Gamescom 2018 and released in Summer 2020. It was developed by Mimimi Productions (of Shadow Tactics: Blades of the Shogun fame) and published by THQ Nordic.

See also Robin Hood: The Legend of Sherwood, by the same company.