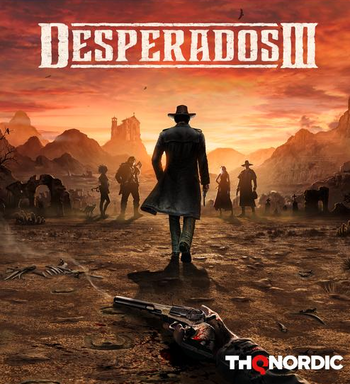 Desperados III is a Real-Time Strategy Stealth-Based Game, developed by Mimimi Games (of Shadow Tactics: Blades of the Shogun fame) and published by THQ Nordic, released on June 16th, 2020. It is the second Numbered Sequel to Desperados, and the fourth entry following Helldorado.
Advertisement:

The game is a prequel to the first, once again following John Cooper, with new faces to join the gang and different abilities. The Quick-Action feature returns under the name Showdown Mode, pausing the game in order to co-ordinate and chain multiple commands, allowing them to play out at the same time.

On September 2020, Mimimi developed a three-part DLC, Money for the Vultures. Taking place three months after the base game, Rosie hires Cooper and the gang to retrieve Vincent Devitt's wealth.