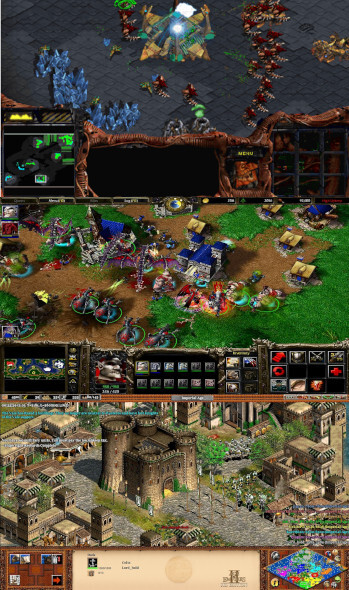 Build a town, train an army, conquer the battlefield.note Top: Starcraft I, Middle: Warcraft III, Bottom: Age of Empires II
Real-Time strategy games, also known as RTS games, are a subgenre of strategy games which focuses on construction and control of a fighting force in battle that takes place in real-time. It has an army of tropes all its own.
Advertisement:

Debate rages as to what the first originating RTS actually was, the results largely dependent on the age and nationality of the participants, and the definition of RTS (which can overlap with real-time tactics or Turn-Based Strategy). The ZX Spectrum had early claimaints many many moons ago (1984 saw Stonkers and 1987 — Nether Earth); the MSX saw Herzog in the late 80s — but only in Japan; and 1989 saw its sequel Herzog Zwei on the Sega Genesis (Mega Drive) which introduced many of the genre conventions. Herzog Zwei was the Trope Maker that spawned the genre, being the common ancestor of every modern RTS, as well as the Trope Namer ("RTS" was coined in this 1989 interview

). It inspired 1992's Dune II by Westwood Studios (later of Command & Conquer fame), which established the form and the tropes of the RTS which are known to the masses today, making it the Trope Codifier.

Games in the genre have one or more factions where the players assume the role of a "god" or commander, controlling units and buildings, building a town, creating an army and eventually crushing their enemies into dust using said army. There are four basic elements of the genre: units, buildings, resources and technologies:

Almost all games of this type are based on ground combat on a 2D map, with various terrain and obstacles adding interest to the battlefield. Airborne and seaborne units are sometimes incorporated, but they are seldom realistic in terms of speed and performancenote Almost all aircraft in RTS games can hover, cannot change altitude, and have unlimited fuel and ammo; naval units are subjected to Critical Existence Failure: the only way even heavily weaponized galleons sink is by having all of their HP depleted, even 1 HP is enough to keep them afloat. As for the GUI itself, it always displays the available resources, enemy factions, the minimap with the revealed terrain and the units/buildings the player can see, and if an unit or building is selected, it also displays the commands/orders it can perform. Several games also have different minimap options allowing players to see resources, enemy units, allied/own units, Wild Card units, and many/all of the above at the same time.

Enhancing one's forces with better equipment and training makes perfect sense, but while a few titles do use plausible terminology for requisitioning new gear, training specialists, retooling factories and deploying the finished products to active forces, most use the peculiar choice of "research" for the process. This gives players the surreal image of scientists doing research on the front lines, making miraculous breakthroughs almost immediately, and then promptly forgetting whatever it was, every single level.

As its name implies, in comparison to its big brother Turn-Based Strategy, the Real Time Strategy genre has players taking action whenever they wish (within the constraints of how often any particular action can be taken). Playtime will continue for other players and entities in the game even if one player sits back and does nothing, rather than breaking up the sequence of play into discrete turns for each player, which brings multiplayer matches down from hours or days to minutes. While this leaves less time for strategizing and encourages fast-paced playstyles, it makes commanders less omniscient, allowing ambushes and distractions to be viable strategies. As for unit pathfinding, unlike other genres such as the First-Person Shooternote Where the player is usually too busy running along a linear path thwarting pre-scripted ambushes to notice, in the RTS genrenote where battles take place in enormous, twisty campaigns and the player is constantly shepherding large numbers of units with a perfect view of their incompetence the tendency of unit AI to unnecessarily bumble around the map in response to choke points and clump together when attacking becomes very obvious; therefore pathfinding is given a high amount of importance, as a game with a weak AI becomes frustrating to play in the "my units are dumb" sense.

The genre also possesses a number of aesthetic conceits, so typical to its presentation that they often confuse even the games' creatorsnote The first three are probably inherited from tabletop wargames, while the fifth has some appliance exceptions:

Refinements of the genre formula have appeared over the years, and in more modern times these include the addition of high ground bonuses for range and vision, bonus damage for flanking enemy troops, terrain bonuses such as cover and concealment, the organization of small units like infantry and fighter craft into squads or wings that act as one unit, aircraft units that act like aircraft (take off, perform mission, land again), elements from the Real Time Tactics genre where there's no base building or unit construction and scale is strictly squad-level (units are acquired at the start of each level), units with limited supplies who can expend all their supplies if left in the lurch, persistent troops that are retained throughout a campaign (introducing RPG Elements), Mobile Factories blurring the distinction between buildings and units, and eschewing gathering resources and destroying the enemy's base in favor of taking and holding positions on the map in order to achieve victory.

open/close all folders
Basic unit archetypes
In a typical RTS, units are classified in one (or more) of four categories: Economic Units, Military Units, Support Units and Specialized Units:

Units whose purpose is the upkeeping of the faction's resources and the construction and maintenance of the civilization.

Units whose purpose is to dish out damage in the battlefield.

Military units whose entire purpose is to counter a specific unit or set of units (usually vehicles/buildings or air units), as opposed to the more generalized basic units.

Another subset of the military units, they are expensive but fast units that can travel most territories where the regular foot units cannot tread. May overlap with Support Units if they can also transport or heal other troops.

Units that have a role that fall outside of the other roles. Usually units with a Difficult, but Awesome requirement.
Basic archetypes of buildings
A critical part of all RTS games is the base-building and Resource-Gathering element, which is also conducted very rapidly. Buildings are divided in Economic buildings, Military buildings and Research buildings.

These buildings' primary purpose is to manage the resources of the faction. They have limited or non-existant combat abilities:

These buildings' purpose is to train the military units that will compose the army that the player will use to crush the enemy factions. Some of them can also overlap with Research building, especially if the techs they contain are related to the units they train:

These buildings are used to research technologies in order to give the faction an edge against the enemy factions.

These buildings aren't faction-oriented, but anyone can claim them and train unique units and research unique techs.
Basic archetypes of resources
The third and most important element of the genre are the resources. Without them you just can't build a base, train an army and squash the opposition into fine pasta. Therefore, RTS matches have at least one battle for resources at some part of the map. It's also common to have a bunch of initial resources near the base. Some of the most recognizable resource sources are:

For common tropes, see Strategy Game Tropes. Compare Strategy RPG. See also Real-Time with Pause for a slightly different approach (may also have variable time scale). The Multiplayer Online Battle Arena genre came out of Real-Time Strategy genre and utilizes a similar camera but with much smaller scope that limits you to one character (and occasionally other units depending on the game's option for it but largely most players will be using one unit) supporting waves of weaker units trying to bring down the enemy's base. See its own page for more information.