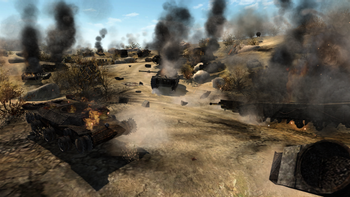 Just another day in this man's army.
Advertisement:

The third game in the Outfront Series, Men of War is a 2009 Real-Time Strategy game set during World War II. It uses a unique Game Engine with fully realistic physics, enabling players to use the environment to their advantage. While it is similar to Company of Heroes, more comparisons could be made toward Theatre of War. Instead of base building, you are given an arbitary number of units (with the option to call in reinforcements in some missions).

The game offers three campaigns, one for the Germans, one for the Soviets and one combined campaign for both the Americans and British (who get a grand total of 1.5 missions ) during Operation Torch. More nations exist in multiplayer, though.

As well as full physics, the two other main selling points of the game are direct control and the GEM Editor. You can spend literally days in the latter, thanks to the fun of it. Ever wanted to see how Operation Unthinkable

would work? You can do that easily. Match a Koenigstiger against an IS-3? That's actually the easiest thing to achieve.