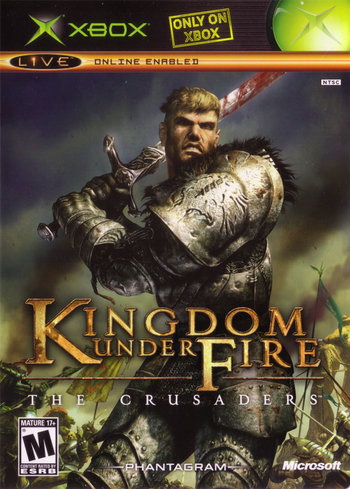 The kingdom of Hironeiden a fine and dandy place to live. Open spaces, nice forests, friendly neighbors to the north and no civil unrest to speak of. Until, that is, a group of soldiers on patrol near the borders discover a hamlet burned to the ground. They chase after the culprits and discover a group of orcs on the run.

From there on it's full out war as the orcs and ogres of Hexter move to invade with their new warlord Regnier at the head of their army while the humans mount their counter offensive. It does not go well, as the various forces of Bersia, all with their own goals and intentions, get involved in a huge war that may very well shape the fate of the entire world.

Kingdom Under Fire: The Crusaders is an action/strategy game for the XBOX released in 2004. It was created by Phantagram, the same studio that would go on to co-develop Ninety-Nine Nights. It received a complementary game named Kingdom under Fire: Heroes in 2005, which tells the side stories of seven other characters that already appeared in the previous game.

It received a sequel for Xbox 360 called Kingdom Under Fire: Circle of Doom in 2007, with some of the playable characters returning, and largely removed the Real-Time Strategy from its predecessors, in favor of a purely Hack and Slash. An online-only sequel simply called Kingdom Under Fire II was announced in 2008, but nothing came of it... until its release in November 2019. The English servers were shut down in 2021.

Kingdom Under Fire: The Crusaders contains examples of: