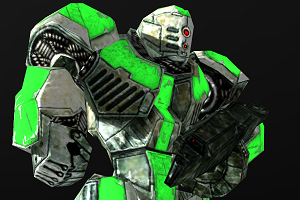 Meet the Glaive.
Nothing is cooler.
-Tagline
You can Maek D-Fenz, or you can play the game.
-1v0ry_k1ng

is a free, open-source Real-Time Strategy game developed for the Spring engine, and available for Windows and Linux. Originally called Complete Annihilation, it was a fork of the (at the time) Abandonware Balanced Annihilaton, which was itself forked from the permanently deceased Absolute Annihilation. The latter was a Spring port of the original Game Mod and unit pack of the same name, which was based on Uberhack, a rebalance of The Core Contingency, an official Expansion Pack of Total Annihilation.

The developers stated design goals are for the game, "to be dynamic, action-packed and hassle-free, full of clever strategies and constantly moving combat with games lasting an average 20-30 minutes." To this end, several important differences from the other TA-derived games have accumulated, including the exclusion of the metal-maker units, the inclusion of both artillery and assault units in almost every factory, a free factory for every player, and the removal of the Tech Tree altogether. Certain units also possess "Unit AI" that automates their combat behavior to a certain extent - raiders jink to avoid slow projectiles, skirmishers back away from enemies that try to close in, while construction and dedicated anti-air units try to avoid ground combat entirely.

The result is a game focused heavily on mobility and overarching strategy. Players are forced to take more and more ground to keep their economy expanding, with combat units that can be built from the first few seconds of the game. Units themselves can be relied upon to conduct themselves sensibly in combat without frenzied micromanagement, leaving players more time (and brainpower) to plan ahead. Turrets have a nasty tendency to be pounded flat from afar, or overrun completely, unless counter-attacks can be mounted with mobile units of their own. In general, if something hasn't blown up after two minutes in-game, you're doing it horribly wrong.

Many of the units in this game borrow their features (and names) from similar units in its predecessors, but the designers decided to break from Total Annihilation's meager storyline altogether, in the hopes of divorcing the game from its copyrighted roots. The replacement story, or what fragments of it have been decided on, consists of two eras - the PlanetWars, in which five barely-Cosmetically Different Sides repeatedly battle across the Milky Way, and the post-PlanetWars, in which humans have been wiped out and only their still-battling machines remain.