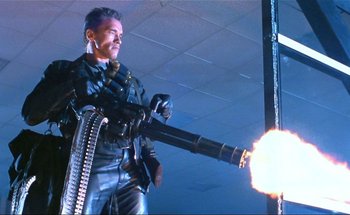 The Governator vetoes a bill.
"She weighs one hundred fifty kilograms and fires two hundred dollar custom-tooled cartridges at 10,000 rounds per minute. It costs four hundred thousand dollars to fire this weapon... for twelve seconds."
— The Heavy, Meet the Heavy
Advertisement:

Ever since Richard Gatling's 1861 invention, the rapid-firing rotary gun has had a special place among BFGs. Because it's basically the gun equivalent of a chainsaw, there is an undeniable attraction to a gun which can produce high enough rates of fire to cleanly trim hedges, cut down trees, or, in the case of the GAU-8 Avenger, saw tanks in half. The practical advantage of having multiple rotating barrels is that the heat generated during firing will be distributed over multiple barrels instead of one, preventing overheating and weapon damage from having such high rates of fire.

The Gatling gun is likely to function as a significantly more powerful version of a regular machine gun, requiring hulking mountains of muscle to move them, or some kind of vehicle mount. If one gets used, you can expect it to give a nice steady buzz as it spews a constant stream of death.

Modern super-fast Gatling guns actually make a strange, deafening buzzing sound in the bass register (5,000 tiny explosions per minute equals 83.3Hz, similar to the sound of a very large truck engine). Some of them, like the Phalanx anti-missile cannon, sound even weirder,

note  best equivalents are an electric lawnmower/trimmer or a high-yield fan because they start at a lower rate of fire and then spin up to a higher one in distinct steps (in such designs they do not actually begin spinning the barrels until it fires the first shot and they require a moment to come up to speed), giving two or more separate "notes". Instead of a Dramatic Gun Cock, the sign that a Gatling is preparing to fire tends to be the sound of it spinning up unless we're talking about Russian designs that historically tend to be autonomously driven and pneumatically cocked, so only start to spin after the first shot was fired.

A popular form of the BFG in fiction, and both a fictional and real-world way of achieving More Dakka via Spectacular Spinning. It may be present even if Energy Weapons are abundant in the setting, as Kinetic Weapons Are Just Better, you the creators may combine the best of both worlds and make an energy-based version of the Gatling. Usually invokes Hyperspace Arsenal, as few media depict both the guns and the vast bins of ammunition they require; the ones that do, though, often resort to depicting it via an Ammunition Backpack. See also Bang, Bang, BANG.

According to Cracked (and the ATF

), owning one of these things is perfectly legal

in the United States due to a Grandfather Clause. It's merely prohibitively expensive.