Film / The Sum of All Fears 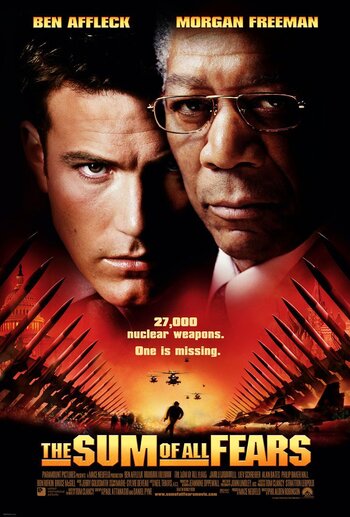 "You don't fight Russia and America. You get Russia and America to fight each other... and destroy each other."
"This no longer has anything to do with Baltimore! Now it's about fear! Our fear of your missiles, your fear of our subs, fear of being weak, fear of making a mistake... the same fear of the other guy that had us build these goddamn bombs in the first place!"
— Jack Ryan
Advertisement:

The Sum of All Fears is a 2002 movie adaptation of the novel of the same name by Tom Clancy. The first Jack Ryan film since Clear and Present Danger in 1994, it acts as a Continuity Reboot of the franchise.

The basic plot centers around a rogue nuclear bomb being developed by a terrorist organization and detonated in an American city to incite mistrust between the United States and Russia to the point of open war. CIA analyst Jack Ryan and his network of friends on both sides rush to track down the actual group responsible before the nuclear option becomes real.

Directed by Phil Alden Robinson, the movie stars Ben Affleck as Jack Ryan, with a supporting cast including Morgan Freeman, Bridget Moynahan, James Cromwell, Ciarán Hinds, and Liev Schreiber. It is notable for changing the villains from Arab terrorists to Neo-Nazis while forwarding the timeline to 2003. It also re-envisions Ryan as a young analyst in a form of Continuity Reboot/Prequel from the previous movies, and has him dealing with his first foray into the real inner workings of the CIA.

The Sum of All Fears contains examples of:

"Our most basic common link... is that we all inhabit this small planet. We all breathe the same air. We all cherish... our children's future. And we are all mortal."