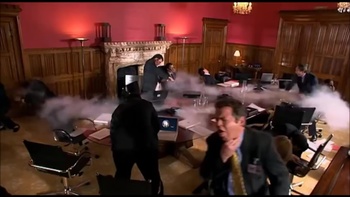 The villain has formulated an Evil Plan so dastardly and Machiavellian that the audience is unlikely to pick up on it on their own. Naturally, the villain wants to keep the details from the heroes, but it is important that the audience know what's going on. In this case, the villain will discuss his plan with a random group of subordinates, a group of business partners (or partners-in-crime), hostages, his family, or some other group. He will gleefully lay out every last detail of his plot with an evil glee.

Then he kills each and every member of his audience off in some pre-arranged fashion (usually a deathtrap of some sort). That way, the audience knows of the villain's plan, but there's no one who can betray the villain by talking to the hero.

It must be noted that the villain doesn't necessarily need to kill every meeting-attendant. If he is the more pragmatic sort, he will spare some select members, usually the ones he still needs for his plan. Or he might even kill just one person, usually the one who is having second thoughts and/or is most outspoken against his plan/leadership. Either way, such cases serves not only as exposition, but also as a way for the villain to display a clear message to his partners/subordinates: "Do as I say, and You Will Be Spared. Cross me and you're next on the chopping block." If it hasn't happened earlier, this will usually be the moment that cements the villain as a Bad Boss.

Related to You Have Failed Me, You Have Outlived Your Usefulness, He Knows Too Much, and Thrown from the Zeppelin. Sometimes includes Lured into a Trap and/or Nasty Party. In part, it plays to the fantasies of anyone who's been in an annoying or boring meeting, and the desire to kill their clueless bosses. Especially note confusion with Thrown from the Zeppelin, of which some examples on this very page are. This is only for when ALL of the audience dies. Thrown from the Zeppelin is when traitors are killed.

Not to be confused with Walk the Plank. Or Ending Fatigue in a Tabletop Game. Or beating someone to death with a two-by-four. And certainly not with getting boared to death.

It turns out he's physically incapable of starting the meeting until one of the attendees dies.

Upon hearing that one of his henchmen had been stealing the money SPECTRE received from selling Red Chinese drugs in the United States, Ernst Blofeld executes the guilty henchman by electrocuting him to death in their chair.

Upon hearing that one of his henchmen had been stealing the money SPECTRE received from selling Red Chinese drugs in the United States, Ernst Blofeld executes the guilty henchman by electrocuting him to death in their chair.