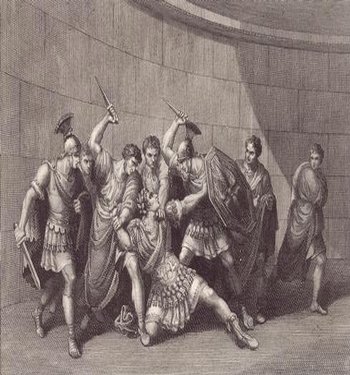 Death of Caligula, Etching by G.Mochetti after drawing by Bartolomeo Pinelli
President Bartlet: I don't need a flu shot.
Captain Morris Tolliver, MD: You do need a flu shot.
Bartlet: How do I know this isn't the start of a military coup? I want the Secret Service in here right away.
Tolliver: In the event of a military coup, sir, what makes you think the Secret Service is gonna be on your side?
Bartlet: ...Now that's a thought that's gonna fester.
— The West Wing, "Post Hoc, Ergo Propter Hoc"

A character is betrayed by the very ones who are supposed to be protecting him or her. In both Real Life and fiction, pretty much the most effective method for killing a head of state or other highly protected target, since they're the only ones allowed in their presence with weapons. Hence, this usually ends up with the victim dead, but in rare cases (especially if the attempt is on The Hero) they survive to seek their revenge on the guards, or whoever was manipulating them. Many cases of The Dog Bites Back will involve this, particularly in the case of Dragons who betray their Big Bad masters. Often done via Betrayal by Inaction or Unfriendly Fire.

May be a manifestation of Even Evil Has Standards.

As this can possibly become a Death Trope, all Spoilers will be unmarked ahead. Beware.