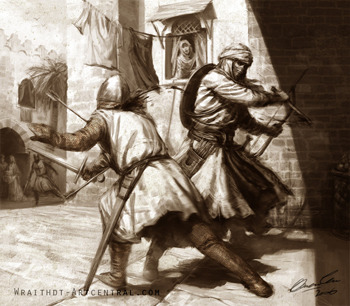 "When the Christian crusaders in the Orient came across that unconquered Order of Assassins, that free-spirited order par excellence, whose lowest ranks lived a life of obedience of the sort no order of monks attained, then they received by some means or other a hint about that symbol and motto, which only the highest ranks kept as their secret, "Nothing is true. Everything is permitted." . . . Well now, that was spiritual freedom. With that the very belief in truth was cancelled. . . Has a European, a Christian free spirit ever wandered by mistake into this proposition and its labyrinthine consequences?"
— Friedrich Nietzsche, On the Genealogy of Morals.

The Hashshashin were an Islamic community in The Middle East around the time of The Crusades, who both named and codified the Assassin archetypenote Notice the similarity between the words "assassin" and "hashshashin"? That's not a coincidence, though only a few know to what extent their image has been Flanderized since then.

Originally they were an esoteric Islamic cult—usually classified as a radical offshoot of the Isma'ili sect of Shi'a Islam—founded by Hassan-i Sabbah, who was born of a Twelver Family, who had converted to Isma'ili, and then later broke off from them to form Nizariyya, an Isma'ili offshoot. They were a society of assassins operating from the mountain fortress Alamut and terrorizing the region's rulers with their attacks. Despite their fearsome reputation, the Hashshashin were said to be quite friendly towards common folk, since their killings were actually carefully targeted and planned, rather than random acts of violence.

Allegedly (according to The Travels of Marco Polo, anyway), Hashshashin recruits were drugged with hashish (the word hashishnote Which originally meant "grass" in Arabic—stoners everywhere think alike is the source of the name), led to a paradisical garden full of lush greenery and beautiful women (supposedly a glimpse of the Islamic paradise), and then told that only the "Old Man of the Mountain" had the means to let them return (i.e. if they died as martyrs), which resulted in their fanatical devotion. There is no historical evidence whatsoever of hashish being used for anything but medicinal purposes, and the connotation of the Assassins being drug addicts was given to them by their enemies and by polemicists who were seeking to discredit the Assassins and the Nizari. Their downfall came when one of their strikes reached the Mongols, who razed Alamut during their conquest of Persia.

In fiction, The Knights Templar are often positioned as the Rivals and Arch-Nemeses of the Hashshashin (and the two are often found alongside each other in Conspiracy Kitchen Sinks); this can be quite frustrating to people who know the region's history, since Crusaders—though not necessarily the Templars themselves—were often allies of the Shia Assassins, since they shared a common enemy (i.e. the Sunni Turkish and to a lesser extent Kurdish and Arab lords who ruled the region, including Zengi and Saladin). Compare Ninjas, the Far Eastern counterpart.

References to the Hashshashin in fiction: