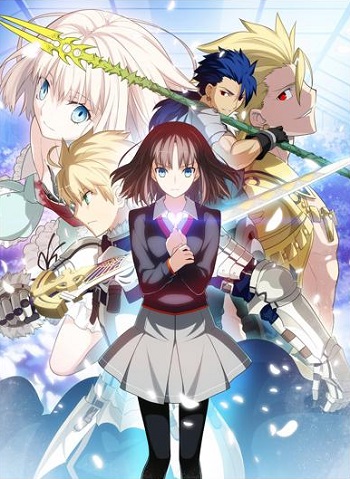 There raise not the dead.
There cannot recover lost things, never again.
Even the greatest miracle can only affect the living—
— Opening Narration
Advertisement:

Once upon a time, Kinoko Nasu thought of a story where various legendary figures were summoned by wizards and made to fight each other for the Holy Grail. That story would eventually become Fate/stay night, following the protagonists Shirou Emiya and the female knight Saber....

But before that there was this story, where the protagonists were Ayaka Sajyou and the male knight Saber.

Fate/Prototype is a twelve-minute OVA released with Season 3 of Carnival Phantasm, acting as a digest version of the original concept of Fate/stay night. It also encompasses a number of material books and the like, including character designs and story excerpts. The basic idea is the same as Fate/stay night, but the difference is in the details.

Four characters (Ayaka, Saber, Lancer, and Archer) appeared in the Hanafuda game in the PSVITA port of Fate/stay night Realta Nua, with their own scenario.

In March 2013 at the Anime Contents Expo Type-Moon released Fate/Prototype -Animation Material-, an artbook that contained storyboard illustrations of Fate/Prototype and scenes that weren't aired in the trailer.

Sakurai has also written a spin-off called Fate/Labyrinth, where Manaka Sajyou spirit hops into an alternate universe and ends up possessing a female magus named Norma Goodfellow, who herself is a participant of a Variant Holy Grail War where she has summoned Artoria Pendragon as her Servant.

In October 2017, Type-Moon released the first CD in a Drama CD adaptation of the Fate/Prototype: Fragments of Sky Silver novels, which covers the entirety of the events, but in a linear fashion.

This article will contain unmarked spoilers for Fate/Prototype and Fate/stay night.