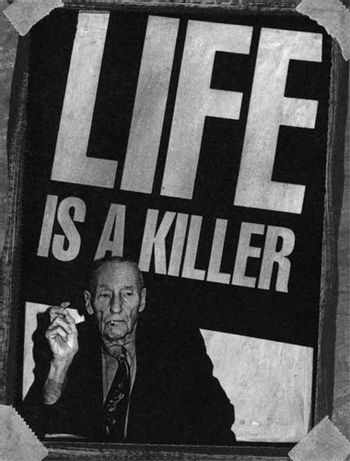 El Hombre Invisible
“Most of the trouble in this world has been caused by folks who can’t mind their own business, because they have no business of their own to mind, any more than a smallpox virus has.”
Advertisement:

One of the great innovators of the 20th century and a founding member of the Beats, William Seward Burroughs II (February 5, 1914 – August 2, 1997) was the avant-garde author of over twenty books, ranging from straightforward and autobiographical (Junky, Queer) to surreal and anarchic (Naked Lunch, and The Nova Trilogy) to nostalgic, solemn and elegiac (The Wild Boys and The Red Night Trilogy). As the titles of his first two books imply, he was both a drug addict and a homosexual bisexual, two things he had always been grimly unapologetic about.

His books contain graphic depictions of drug usage and sodomy, which are still shocking even by today's comparably cynical standards. But, subject matter aside, his prose was always inspirational and stunningly original, flowing like poetry even while depicting fecal matter and ejaculation. Frequently taking Refuge in Audacity and always Crossing the Line Twice, Burroughs was called the "greatest satirical writer since Jonathan Swift" (author of the misanthropic Gulliver's Travels and the baby-eating fun of A Modest Proposal) by friend and fellow Beat writer Jack Kerouac, and the controversy surrounding his opus Naked Lunch effectively ended literary censorship in America.

Burroughs's "routines", as he called them, are the literary equivalent to a depraved vaudeville act, or by modern sensibility, a raunchy sketch show. Utilizing over-the-top characterization and hilariously opaque scenarios, Burroughs's fiction can change scenes at the drop of the hat, jumping from short, punchy hilarity to weird sex back to short, punchy hilarity. But, humor aside, he always had something completely serious to say. His experiences as a drug addict allowed him to see the complications of life reduced to a grimy skeleton, what he called "The Algebra of Need".

In fact, Junky reads more like an anthropological analysis of drug addiction than a personal memoir, and his follow-up Queer (which wasn't published until many years later) occupies a sort of middle ground. His habit of telling outrageous routines originates in the latter, but it was written out of desperation in the wake of a great personal tragedy which has since become legend: Burroughs shot his wife, Joan Vollmer, in the head during a drunken game of "William Tell". While it was likely just an accident, Burroughs couldn't help but think there was something in his subconscious that drove him to it, and later claimed he was possessed by "The Ugly Spirit".

Despite his personal troubles and the controversy surrounding his work, Burroughs became highly influential and respected by a wide variety of younger artists, most notably the more famous beat writers Jack Kerouac and Allen Ginsberg. After experimenting with the cut-up technique, he almost pioneered the graphic novel form (Alan Moore openly cites Burroughs as a prominent inspiration), but couldn't get the funds because of the expenses of color copying. His works have also served as an important influence on Cyberpunk and New Wave Science Fiction (the Nova Trilogy, as science fiction itself, is considered a sort of prototype of the New Wave). The actual punk scene owes a great deal to Burroughs, as well, with his return to America in 1974 being feted by a large number of punks and related artists (including Patti Smith); the Godfather of Punk Iggy Pop was such a big fan ("Lust for Life" is merely his most obvious example of Burroughs fandom) that when the BBC did a radio biography of Burroughs, he was chosen to present it. And of course, there's his literary heir, Hunter S. Thompson, who was basically Burroughs if he were straight, younger, and focused more on sports writing and other nonfiction. Most Thompson fans have at least a liking for Burroughs, and vice versa.

Burroughs' use of the cut-up technique, surrealist satire and harsh criticism of society made him a countercultural figure starting in The '70s, and he began to be cited as a significant influence by numerous musicians, including Genesis P-Orridge, Ian Curtis, Al Jourgensen, Tom Waits, Lou Reed, David Bowie, Brian Eno, Kurt Cobain, Roger Waters, Laurie Anderson (for whom he recorded a spoken-word guest vocal for an album), Patti Smith, and others. Burroughs himself later embarked on a spoken word career, collaborating with Ministry, Throbbing Gristle, Tom Waits, Nick Cave, R.E.M., Sonic Youth and Kurt Cobain, among others. His last filmed performance was in the video for U2's "Last Night on Earth", in which he pushes a shopping cart with a large spotlight on it and has an extreme closeup of his eyes at the end.

Collecting Burroughs' works can be complex, owing to the fact that he often revised his texts for later reprints (Junky and The Nova Trilogy are two examples). This has continued after his death, with a number of "restored text" versions of his novels being published featuring previously censored or edited material.

Works by William S. Burroughs with their own pages:

Tropes often seen in the works of William S. Burroughs: