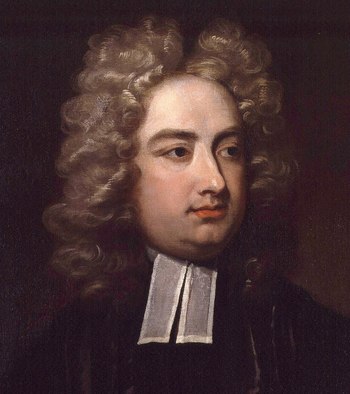 Jonathan Swift (30 November 1667 – 19 October 1745) was an Anglo-Irish satirist, poet, Tory pamphleteer and Anglican priest whose works were published in the first decades of the 18th century.

He is generally regarded as the preeminent satirist in the English language. All of Swift's works were published under pseudonyms, to maintain distance between his day job as a priest and his caustic, cynical wit.

He is an example of Vindicated by History: while his works were reasonably well known at the time, he and fellow Tory Alexander Pope are nowadays much better known than their Whig rivals such as Joseph Addison and Dick Steele, whose party defeated the Tories so comprehensively that it forced Swift into exile (in his native Ireland, mind you, and as Dean of St Patrick's Cathedral, so it's not like the exile was incommodious).