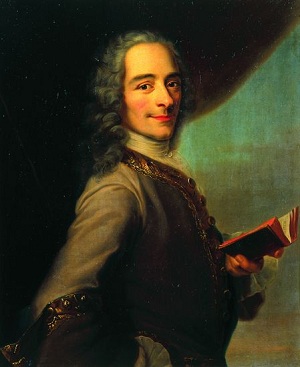 Real name François Marie Arouet. French dude, 21 November 1694 – 30 May 1778. Satirical philosopher. He is best known for his witty defense of civil liberties, freedom of religion, and free trade (he had staunch liberal views on economic issues). His views earned him one year in the Bastille at the time of the Régence, where he gained his penname. He would later make a huge fortune in military furniture and gain great influence in the French and Prussian royal courts under kings Louis XV and Frederick II the Great. He would go on to inspire multiple philosophers and satirical authors, especially amongst those who supported his views. His writings also inspired both the French and American revolutions. He was also a historian and a scientist who published multiple essays. Prolific, as he published more than 20,000 letters and 2,000 books and pamphlets. The name Voltaire comes from ''Arouet le jeune'' ("Arouet the Young"), converted to Latin script where U=V and J=I; AROVET L I -> VOLTAIRE. He is eminently quotable, and mis-quotable. His favourite target was Jean-Jacques Rousseau.note Ironically, both died the same year and rest in front of each other in the same crypt of the Pantheon in Paris; both are considered the spiritual fathers of the French Revolution, despite their personal enmity and clashing views.

Probably shouldn't be confused with the musician or the pinball game Cirqus Voltaire.