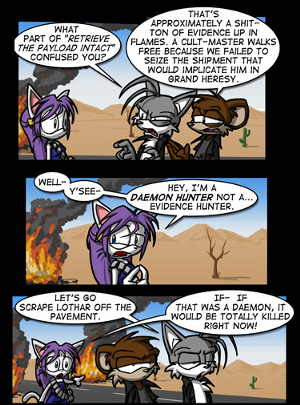 They don't call her Wildfire for her surgical precision.
"Old age and treachery will beat youth and skill every time."
— Proverb
Advertisement:

You get a young character who is pretty awesome at what they do. This person out-performs the grizzled veterans at nearly everything, whether it's bringing down the Monster of the Week, commanding the Redshirt Army into battle, or solving the murder. A few years older and they will be a total badass.

There's just one problem: their complete lack of real-world experience.

This character's talents may serve them well in a professional context, but they still find themselves running into trouble by doing things the superior experience of their less talented predecessors would tell them to avoid. This is often exacerbated by arrogance and Pride from the rookie who finds themselves outperforming people who have made kicking ass their career. Sometimes they will have a sense of responsibility to use their new abilities to the fullest (not having the patience and foresight more experienced characters have in knowing you can't help anyone if you are dead, of course).

Many, many heroes start off this way. The Hero often starts off as the least experienced member of the Five-Man Band, giving them room to grow as a character while tending to ultimately be the most powerful member of their team. Main characters in general have a nasty habit of going beyond their experience levels and relying on raw talent and bravado, which frequently gets the rest of the group into trouble as well. In particularly tragic circumstances, such impetuosity can get a character or their allies killed, with all the emotional torque and lessons about the fragility of youth and the dangers of overestimating talents. It's a frequent source of the Mentor Occupational Hazard.

Kid Heroes, such as Young Guns, Kid Samurai, and Cute Bruisers, can find themselves falling into this. Add Hot-Blooded into the mix and you're asking for impetuosity combined with incompetence. In a military setting, this can be one of the defining traits of Ensign Newbie.

This trope is very closely related to Idiot Hero, to the point where the two tropes look identical at first glance. There is a subtle difference however. While Idiot Hero refers to a character who is genuinely intellectually challenged but whose other strengths (Heroism, personality and morality) make them a hero, characters of this trope may be very intelligent, possibly even geniuses, but they don't have enough experience, both in life and in their chosen fields, to make the best of that talent. It's a subtle difference, but an important one. However, an Idiot Hero can also be Skilled But Naive if their usual line of work tends to rely more on instinct and moral certainty than on abstract intelligence, and naturally the lack of intelligence will tend to exacerbate their naïveté.

If they do evolve, they are rather malleable. A bad shock may send them into themselves, creating a Zen Survivor or Knight in Sour Armor, a character who feels cynically about issues but still can't stop the bold idealistic tendencies from showing through when the chips are down. Or constant steady success may create a full-on Action Hero or All-Loving Hero. They can easily become a Future Badass in cases of Sacrificial Lion or an earlier Downer Ending where this character survives. Compare Innocent Prodigy. See also Well-Trained, but Inexperienced, a character that is well trained but has little to no actual combat experience.

Note that to fit this trope characters have to be:

1) Just as powerful or more powerful than more experienced characters.

2) Noticeably remarkable in their skills for their experience level.

3) Naïve when it comes to comprehending the world around them, subtle meanings of things, and the like. (These characters are likely to be Wide Eyed Idealists and believe in Honor Before Reason. They are excellent candidates for believing in Black-and-White Morality in a more realistic setting where shades of grey are the norm.)

4) While being excellent technical fighters and academically very capable at what they do, they are vulnerable to tactical oversights that only a more experienced character could possibly pick up on.