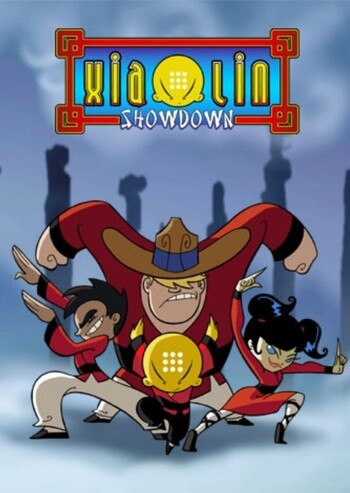 Omi, the precocious young Chinese monk and Dragon of Water;

Kimiko Tohomiko, the tech-savvy hothead who's originally from Japan and the Dragon of Fire

and Clay Bailey, the strong, steady Texan cowboy and Dragon of Earth;

Along with their standard monk training, they are tasked by Master Fung to collect mystical Xiaolin artifacts known as the Shen Gong Wu, which were scattered around the world by the original Xiaolin Dragon, Dashi, and Dojo Kanojo Cho, a cowardly size-shifting dragon. Whenever two (or more) people enter a standoff over a Wu, a Xiaolin Showdown occurs, with the winner taking all the gambled Shen Gong Wu.

In their quest for the Wu, they battle an assortment of villains, including Jack Spicer, a Teen Genius mech designer who just wants to be taken seriously; Wuya, a Heylin witch sealed as a ghost inside a puzzle box who will do anything to regain her living form; Chase Young, an immortal Visionary Villain with designs on Omi; and Hannibal Roy Bean, who is indeed a bean. The numerous Shen Gong Wu change hands rapidly, permitting neither side any real advantage until one of the characters - hero, villain, or otherwise - decides to get serious.

Perhaps best known for its surprisingly well-developed central cast, its collection of voice acting talents, and its general aversion to Anvilicious Aesops, Xiaolin Showdown was the ratings darling of the Kids WB Saturday morning block. However, it only lasted three seasons, or 52 episodes, all of which are readily available on iTunes

(in widescreen and HD, no less).

A revival titled Xiaolin Chronicles premiered in August of 2013, albeit with modified character designs, a cast of new voice actors (save for Tara Strong and Jennifer Hale), and renamed Wu.

This series contains examples of (for more, also visit the episode guide):

During Wuya's revival, the world starts getting hit with spontaneous darkness and decay. The bald Omi proclaims that his hair would be standing on end if he had any, followed by the foot-lacking Dojo saying that he'd be quaking in his boots if he had any.

Example of:
I Would Say If I Could Say

During Wuya's revival, the world starts getting hit with spontaneous darkness and decay. The bald Omi proclaims that his hair would be standing on end if he had any, followed by the foot-lacking Dojo saying that he'd be quaking in his boots if he had any.