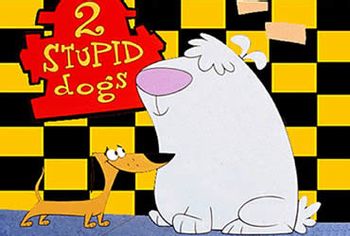 "Well, isn't that cute. But it's WRONG!"
Advertisement:

This Animated Series, originally aired on TBS and broadcast syndication between 1993 and 1995, was Hanna-Barbera's answer to Ren & Stimpy.

As expected, it revolves around a mismatched pair of stray, idiotic dogs, neither of whom is named on or off the program, who generally wandered about getting into surreally wacky misadventures. The shorts had several recurring characters, including a ditzy version of Red Riding Hood, a shy schoolboy called Kenny, and most importantly their most frequent antagonist, the loudmouthed "Mr. H" (or "Hollywood" in the credits).

The backup feature of the show was a Revival of Secret Squirrel called Super Secret Secret Squirrel. This version consistently featured Funny Animals beyond Secret and Morocco Mole. It also introduced "Penny", secretary to Da Chief (and an obvious counterpart to Miss Moneypenny.)

Compare and contrast SWAT Kats, which ran alongside the series on TBS and most local stations and were both examples of shows bringing their own style with a good helping of Promoted Fanboy love. Even though in content was pretty much different in every way (like being action-adventure instead of comedy). Ultimately they were both ended to focus on the What-A-Cartoon! project (though for a while, SWAT Kats fans believed Ted Turner was the cause, thanks to a misquoted interview).

Today, the show is notable for kickstarting the careers of several animators who'd make a name for themselves in the later half of the 90s, such as Craig McCracken, Genndy Tartakovsky, Paul Rudish and Tony Craig (all from the Cal Arts class of 1992).

2 Stupid Dogs provides examples of (Secret Squirrel tropes go to their own page):