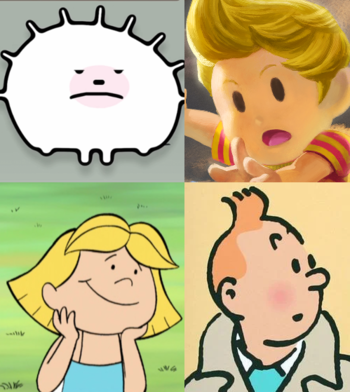 A fairly common trait amongst works with a simplistic art style is that the characters' eyes will be nothing more than a dot on their faces. Many fans of animated works will be openly familiar with this particular trope since it shows up in both Western and Eastern animation, the latter of which is usually in the form of Super Deformed Chibis. In some cases the characters may get Skintone Sclerae or Sphere Eyes when a shocked expression is needed.

Could end up causing Only Six Faces or in some cases, the exact opposite. The only eyes to show up in a more detailed Stick-Figure Comic. Might be a way to add a touch of cuteness to the series. Sudden Eye Colour occurs when Art Evolution leads to a character with black bead eyes having colored eyes in later installments.

In works which avert this trope, black bead eyes may be used for a character being drawn in the distance for simplicity.