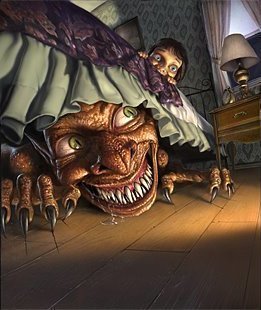 There's been a string of weird killings lately. The victims come from all walks of life, with only one thing in common. They were asleep at the time. It's time to break out the Coffee and Red Bull to fight Sleep Deprivation because no one can get a good night's rest until whoever or whatever did this is caught. Depending on whether or not the killer works internally (kills you in your dreams) or externally (just plain kills you) a main character who does succumb to sleep, and doesn't get killed off, might have to fight a Battle in the Center of the Mind in order to defeat the monster once and for all. This isn't necessary for the trope, but it still happens a lot.

This is a Horror Trope where the monster or killer targets people who are asleep or otherwise unconscious, and the main characters have to stay awake to stay alive. The "Killer" is loosely defined here, it can be a disease or inanimate object, what's important to the trope is that the victim is at risk, or at least at a substantially greater risk of death if they fall asleep. Can make pretty potent Paranoia Fuel as it ties in with basic primal fears of the scary monster in the closet or under the bed who's only waiting for the lights to go out and you to fall asleep to come out and get you. As we all know Dark Is Evil, and since we sleep in the dark, it's only a short step to "sleep itself is dangerous." After all, a person is most vulnerable while sleeping, as there is no way to see, and fight their attacker.

See also Things That Go "Bump" in the Night, Your Worst Nightmare, Sleep Paralysis Creature and Your Mind Makes It Real. Not to be confused with Fatal Familial Insomnia,

a Real Life prion disease that progressively erodes a patient's ability to sleep until they die from not sleeping.

Not to be confused with The Sleepless, which is where someone never needs to go to sleep.

The Sandman is a creature from the nightmare realm that traps its victims in their worst fears. Martin uses Diana as bait to lure it out, but fails to trap it and stop it from hurting Diana.

The Sandman is a creature from the nightmare realm that traps its victims in their worst fears. Martin uses Diana as bait to lure it out, but fails to trap it and stop it from hurting Diana.