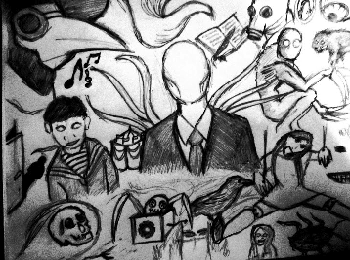 Fear is here.note drawing by alliterator
At the end of days, as we lay ourselves down to the impossible world of dreams, our minds conjure up creations of a blackened reality where meaning and fear are synonymous. Beings rise out of the fiery fields of gray and evoke newfound emotions our consciousness practically invents on the spot. There is much power in the mind, and the creative mind crafts haunting ruses without boundary.
— From the introduction to Faces, Strange and Secret

is an immense, detailed writing community spanning thousands of works and featuring a good number of antagonists to each. Its original purpose was a spin-off to the Slender Man Mythos, and was created by Owen Norris, Adam Levine, and Seann Barbour.

The premise? There are monsters called "Fears," original creatures note The Slender Man and The Rake, two creatures from the public domain of creepypasta, were at one point classified as Fears, but that's no longer pushed. Authors can feel free to call them Fears if they want due to our open source nature, but for all intents and purposes they won't be covered on this page. that are, for lack of a better term, manifestations of humanity's most primal fears and phobias, hence the name.

The Fear Mythos deals with blogs, vlogs, creepypasta, video games, and whatever else there exists that regard to these disturbing beings (there is now even a book). No canon or continuity required; writers get complete freedom, and each canon is unique to its respectful author.

The Fear Mythos manifesto and some other helpful information can be found here.

A list of all current blogs can be found here

, while a list of Fears (and descriptions) can be found on the characters page. A blog dedicated to Fear-based creepypasta can be found here.

A Wiki has been created, and can be found here

For the video game, see Fear Mythos: The RPG. There is now an anthology of Fear Mythos stories available here