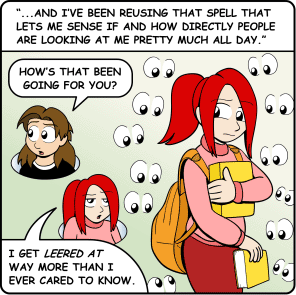 "It feels like somebody... WANTS TO SELL ME SOMETHING!!!"
— Sponge Bob, SpongeBob SquarePantsnote  "I told you he was onto us!"
Advertisement:

A character knows that he is, and any companions with him are, being watched by someone (or someones) despite no one nearby appearing to pay any attention to them. The character may credit Spider-Sense, Telepathy, knowledge of an Ancient Conspiracy, the presence of someone in a Conspicuous Trenchcoat, or similar tropes, or they may break the fourth wall by making note of a Camera Trick like Eyedscreen, Rack Focus, or a Tracking Zoom.

Use of this trope often results in other tropes like I Can See You, I Know You're Watching Me, Spy Speak, Trouble Entendres, Talking Through Technique, and We Need a Distraction.