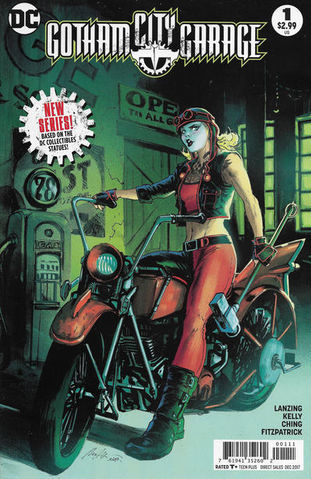 Story by Collin Kelly and Jackson Lanzing
Governor Luthor's Paradise on Earth. The Last City. No sickness. No bad thoughts. No pain. Ever. Everyone happy, content, and otherwise perfect. Except me.
— Kara Gordon
Advertisement:

Gotham City Garage is a 2017 digital-first comic-series published by DC Comics and set in a post-apocalyptic future. The same as DC Comics Bombshells, it's inspired by a DC Collectibles statue line.

It's been decades since a cataclysm dried the seas and burned the human cities. Thirty-five years ago, Lex Luthor took over Gotham City, renamed it The Garden — the Last City on Earth — and turned it into a city where nothing bad ever happens... unless you step out of line, in which case you'll be instantly terminated by Luthor's bat-dressed enforcers, the Gardeners.

Kara Gordon is a ridealong technician who pretends to be the happiest person around. Reality is, she hates Luthor, she detests the City and dreams of escaping and looking for the mythical Wonder Woman. One day she saves a man from getting gunned down and is noticed by the Gardeners. Her father James Gordon reveals she's his adoptive daughter whom he rescued from Luthor's experiments, and now she has to run away or will be terminated.

Kara makes it beyond the dome surrounding the city and is rescued by a rebel group led by Natasha Irons who is determined to take Lex Luthor down.

Compare with DC Comics Bombshells, another Elseworlds story inspired by a statue line and featuring DC female heroes and villains.

Kara: Doesn't take long to come up with the answer. My family. My past. My freedom. Everything's murky now. Enshrouded. So instead, I start with the one thing I know. Hope.