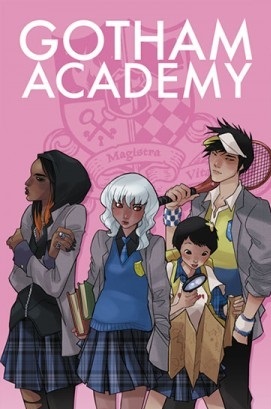 For over seventy-five years Gotham City has been established as a sprawling metropolis bursting at the seams with crime, corruption, and vice. Only the efforts of a few brave individuals such as The Batman keep the city from falling into ruins, at the hands of the infamous rogues that prowl its streets.

But this comic is not about any of that. (Except when it is.)

Gotham Academy is a monthly pseudo-spinoff of the Batman series by Becky Cloonan, Brendan Fletcher, and Karl Kerschl that launched in 2014. As its name would imply, it's focused on the lives of the students attending Gotham's eponymous and most prestigious academy, particularly one Olive Silverlock. Attending her second year at the academy, she trudges through school life with a laundry list of personal problems and a knack for getting into trouble. Like many other famous schools, life at Gotham Academy is anything but normal.

In 2016, the series got a relaunch as part of DC Rebirth with a new title called Gotham Academy: Second Semester, in addition to a six-issue crossover with Lumberjanes. In 2022, Maps reappeared in the backup strip for Batman (Joshua Williamson), under the title A Gotham Academy Adventure. A story appeared in the 2022 anthology Saved By The Belle Reve.