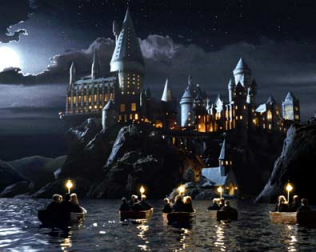 A school where adventure abounds, weirdness is everywhere, and anything that could happen, will happen. Teachers turning out to be villains, strange beings stalking the school grounds, random (or maybe not so random) students getting kidnapped while the Unlikely Hero has to chase after them... Never a dull day, no matter how boring the classes are.

The school is, simply put, a Weirdness Magnet, perfect for the budding kid adventurer or hero in disguise as a teacher. A school like this will often be rivals to the local Academy of Evil.

Generally, this tends to happen to any school the hero is enrolled in or teaching in, so it can be anything from a grade school to a college. See also City of Adventure and Building of Adventure. Just like there, contrast Nothing Exciting Ever Happens Here. If the school explains its weirdness factor by having super powered students, monster students or magical classes, then it's either an Extranormal Institute (especially if it's a Superhero School), an All-Ghouls School or a Wizarding School, respectively. Such a school would often be a World of Mysteries.