Film / The 36th Chamber of Shaolin 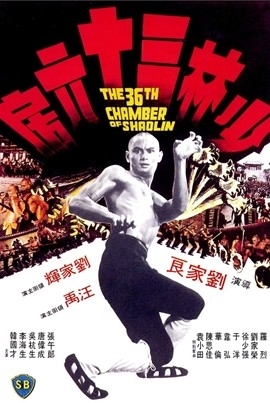 A failed assassination attempt by a rebel leader inspires some young men to join the local Canton rebellion, only for the Manchu government (led by Lo Lieh) to find out about their involvement. In order to crush the local rebellion they begin a brutal campaign to exterminate the rebels, leaving one wounded and desperate student, Liu Yu-de, to seek refuge at a secretive monastery, where he changes his name to San Te. Fueled by his desire for justice over his loss of family and friends at the hands of the Manchu, he undergoes a grueling program of martial arts training that hones his strength, agility, and endurance in order to defeat his enemies.

The rap group Wu-Tang Clan are big fans of this movie, and gave their debut album the subtitle "36 Chambers" in its honour. Wu-Tang member Masta Killa also takes his name from a Market-Based Title this movie had.