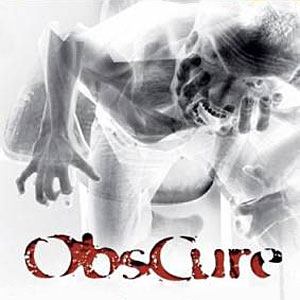 In this school, they teach you things you never wanted to know about.
Advertisement:

Essentially Resident Evil IN HIGH SCHOOL WITH CO-OP! ObsCure is a series of survival horror games by Hydravision Entertainment (later Mighty Rocket Studio) for the PlayStation 2, original Xbox, and PC. The presentation is similar to the PlayStation 2 era Silent Hill games (Silent Hill 2 through Silent Hill 4: The Room), played from a third-person perspective with a fixed, floating camera tracking the player from a distance within a fully 3D environment.

One of its most notable features was its two-player cooperative mode. Instead of exploring the haunted halls alone, the teens were Genre Savvy enough to stick together in pairs, with the player selecting who to take along as a partner. Said partner was either controlled by the game's AI or a second player, and each character had had a unique skill to make parts of the game easier.

Another part of the game's charm was its campiness. Styled after the post-modern, "meta", Genre Savvy teen horror movies of the late '90s (such as Scream (1996) and especially The Faculty), the games were flush with corny, Totally Radical dialogue and characters written as broad caricatures of teen movie heroes and villains. The first game even featured the song "Still Waiting" by Sum 41 as its theme song, as a nod to such films' "hip" soundtracks.

The first two games were rereleased

Something strange is going on at Leafmore High. Students are disappearing, teachers are acting oddly... When Kenny Matthews, a varsity athlete, makes an horrific discovery under the school, four of his friends — his cheerleader girlfriend Ashley Thompson, school reporter Josh Carter, stoner friend Stanley "Stan" Jones, and little sister Shannon — join him in investigating what exactly the hell is happening. However, they quickly find themselves locked in the school overnight, and now there're things roaming the halls...

Notably, none of the five characters were ever required to advance the plot... mainly because all of them could be easily Killed Off for Real at any time. Losing somebody didn't instantly equal a Game Over; you could continue without them so long as you had somebody left to play as. Having every character still alive was also necessary to achieve the Golden Ending. The game also had the player using light as a weapon in the form of flashlights that weakened enemies, flashbang grenades that acted as smart bombs, and even smashing open windows to let in sunlight, several years before Alan Wake employed a similar mechanic.

The sequel, ObsCure II (known in America as ObsCure: The Aftermath), takes place two years after the events at Leafmore. Shannon and Kenny are attending the nearby Fallcreek University, while Stan dropped out and is working as a pizza delivery boy. Stan and Kenny have to take medication to stave off the aftereffects of what happened at Leafmore, while Shannon has managed to adapt on her own... something she frequently snipes at the boys about.

Unfortunately, there's a new recreational drug that's become trendy among the students, one that's made from a strange-looking flower that keeps appearing all over the campus. Naturally, it isn't long before the survivors of Leafmore High, along with a small group of other students at Fallcreek, find themselves facing hordes of mutants and struggling to stop the contagion from spreading too far. What follows is a romp through the college dorms, a frat house, a hospital, and the dark woods outside of town, and a long parade of Cruel and Unusual Deaths as everything comes out of the woodwork to kill our intrepid heroes.

Unlike the first game, the partners (and deaths) for each section of the game are decided as part of the plot, and each hero's skills are actually required to navigate past the various puzzles and obstacles. Characterization is beefed up from the first game; while the five protagonists in the original got nearly all of their characterization in the opening scenes, the structure of the plot here means that they get real Character Development over the course of the game, much of it provided through combat dialogue. However, the returning characters from the original get hit with a bad case of Not as You Know Them in the process.

A spinoff called Final Exam was released in late 2013 on PC, Play Station Network, and Xbox Live Arcade. Unlike the first two games, Final Exam is a side-scrolling 2½D Hack and Slash with a more exaggerated art style. It is about four former high school buddies — the football hero Brutal Joe, the nerd Nathan, the tough guy Sean, and the dancer Cassy — who get together for their school reunion, only to arrive and find the town overrun with monsters.

It was originally conceived as ObsCure D, an interquel to the first two games, but that version was scrapped after Hydravision closed its doors. It was retooled into Final Exam, with an original story and characters, after former members of Hydravision founded Mighty Rocket Studio. While not officially part of the ObsCure series, it has enough Shout Outs to the games that fans consider it a sequel in all but name.