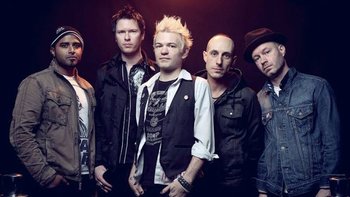 Sum 41 is a pop punk rock band from Ontario, Canada, formed in 1996 by vocalist/guitarist Deryck Whibley and drummer Steve Jocz under the name Casper. They were soon joined by lead guitarist Dave Baksh and after a set of bass guitarist they finally settled on Jason "Cone" McCaslin in 1999, by which point they'd changed their name to Sum 41 (because they'd formed 41 days into their summer vacation). Their first album, All Killer, No Filler, was released in 2001 and spawned their most successful single, "Fat Lip".

Their follow-up album Does This Look Infected? was released in 2002. It featured a darker sound and also more serious lyrical themes. This continued onto their third album Chuck, released in 2004. In 2006, Baksh left the band to focus on his own band Brown Brigade and the band recorded their next two albums, 2007's Underclass Hero and 2011's Screaming Bloody Murder, as a trio. In this time, Tom Thacker of Gob was hired as their touring guitarist.

Drummer Steve Jocz left the band in April of 2013 and was replaced with Frank Zummo, leaving Deryck as the sole remaining founding member until Dave Baksh returned in 2015. By that point, Thacker became a full time member and they recorded their next two albums, 2016's 13 Voices and 2019's Order In Decline, as a 5 piece band. A double album, titled Heaven and Hell is in works.