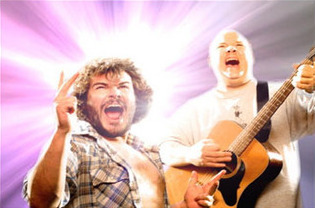 Your socks have officially been rocked off.
Influenced by:
Since the beginning of time, 'twas written in the stones that a band would come.
Well, now that band has come, and now they're here to come again, in your earpussies.
Advertisement:

They are but men. ROCK!

Tenacious D, also known as "The D" and modestly referred to as "The Greatest Band In the World", are an American duo formed of lead vocalist/​guitarist/​actor/​Large Ham Jack Black and lead guitarist/​backing vocalist/​Straight Man Kyle Gass (aka J.B. and K.G., aka Jables and Kage), that have been active since 1994. They are known for their use of acoustic guitars, wacky sense of humour revolving heavily around audacity, vulgarity and lampooning clichés associated with Heavy Metal and Rock & Roll. While being a really awesome heavy metal band, just because they can.

Initially performing as an "acoustic metal" duo, Black and Gass got attention thanks to their short-lived TV series Tenacious D, which ran on HBO in 1997. Despite being only three episodes (six features) long, the series helped bring attention to The D, and they quickly secured spots opening for Beck, Pearl Jam, the Foo Fighters and tool.

By the time the band signed to a label in 2000, they had a pretty high profile thanks to Black's acting work. Backed by a Dream Team of musicians that included Dave Grohl on drums and guitars, Oingo Boingo guitarist Warren Fitzgerald, bassist Steve MacDonald and Phish keyboardist Page McConnell, Tenacious D showed the band maturing into an outright metal band while still retaining the acoustic guitars and perfecting their outrageous humour and parodies. Split between full band-reworkings of songs from the TV series, a few new songs and comedic skits, the debut blew the minds, kicked the asses (with karate!) and rocked the socks of everyone who ever heard it, and provided the band with its Signature Song: "Tribute", a tribute to "the best song in the world" that the band played to defeat Satan but promptly forgot afterwards. It's a Long Story.

In 2001, Tenacious D gained notoriety for releasing the extremely bawdy animated short music video by The Ren & Stimpy Show creator John Kricfalusi for the song "Fuck Her Gently" which was featured (alongside Happy Tree Friends) in that year's annual Festival of Sick and Twisted Animation. (NSFW

For their next project, The D decided to blow minds in the movie world as well and began working on a movie, Tenacious D in The Pick of Destiny. A soundtrack was also recorded, named simply The Pick of Destiny and featuring contributions from Grohl, Meat Loaf and Ronnie James Dio. The film came out in 2006 and failed at the box office, probably due to Satan's intervention, while the soundtrack got a mixed but positive reception.

After laying low for a while, they came back to blow everybody's minds once again with their new album, Rise of the Fenix. Critical reception was decent, but the fans were far more positive, calling it a welcome return to form.

In 2018, Tenacious D released a YouTube mini-series titled "Post-Apocalypto", a crudely drawn, slideshow of an animated series involving the duo attempting to survive a nuclear apocalypse. Praised by fans, the album/soundtrack was released on November 2, 2018.

To celebrate both Halloween and the 2020 election, Tenacious D does their own rendition of "Time Warp" from Rocky Horror Picture Show.

To celebrate both Halloween and the 2020 election, Tenacious D does their own rendition of "Time Warp" from Rocky Horror Picture Show.