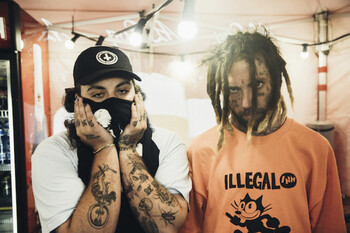 $UICIDEBOY$ are a rap duo from the city of New Orleans. The group consists of $crim and Ruby Da Cherry, two cousins who grew up in the 7th Ward of New Orleans. Their work is released through their label G*59 Recordsnote pronounced "grey five nine".

The group is known for their bleak lyrics (A product of $crim's drug addiction and Ruby's depression) and dark instrumentals, heavily influenced by 90s Memphis scene acts such as Three 6 Mafia, early Cash Money, trap music and even hardcore punk.

Despite only having existed for a few years, they've amassed a surprisingly large discography and a large fanbase, with 36 EPs and 6 mixtapes and an upcoming album, not to mention collaborations with such artists as Music/Getter, Denzel Curry, JGRXXN and Juicy J.

Their Bandcamp page can be found here

and their Soundcloud is here

Tropes related to the boys: