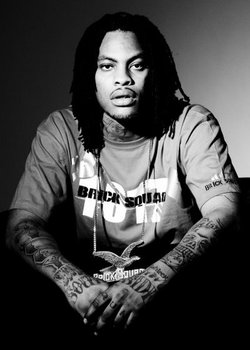 Waka Flocka Flame (real name Juaquin James Malphurs, born May 31, 1986) is an American rapper from Atlanta. He is a well known associate of Gucci Mane, owing to them once having been the two leading rappers off the 1017 Brick Squad label, (although they are currently feuding). Waka is well known for his sledgehammer delivery and foul language. He has released two full albums to date: Flockaveli and "Triple F Life: Fans, Friends & Family". The four singles from his first album were "O Let's do it", "Hard in da Paint", "No Hands", and "Grove St. Party". Triple F yielded the singles "Round of Applause", "I Don't Really Care", and "Get Low".