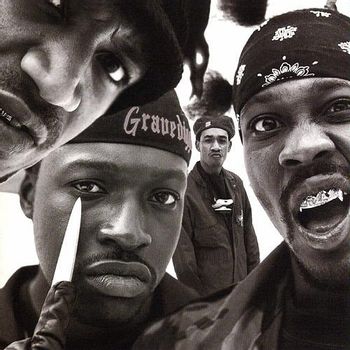 This isn't the climax of the latest Stephen King book or Jason, part 17.
"I'm gonna slice and dice cause murder's my vice. I'll stab you once, twice maybe even thrice. Carve initials in your liver. Make you quiver, deliver. Yeah, that'd be nice. I'll dissect your heart. Rip your entrails apart. Hack off your head. And that's just the start."
— L.I.F.E. Long
Advertisement:

Horrorcore rap music is essentially Gangsta Rap meets Horror Tropes, with a touch of bloodthirsty metal for good measure. Musically, they're basically "what if you rapped Death Metal lyrics?" The production style usually also favors dark and often dissonant textures, as well as horror movie samples. Rock and metal guitar samples are also common, while many Soundcloud horrorcore artists from the 2010s were more rooted in trap and mixed in elements of nu metal and extreme metal.

There's dispute over where the genre originated, but it's agreed that the Geto Boys, Ganksta N-I-P, Brotha Lynch Hung and Insane Poetry were the forebears of the genre. Horrorcore is more or less gangsta rap turned up to 11. Expect subject matter to cover cannibalism, rape, torture, infanticide, occultism, necrophilia and other horrible things For the Evulz. However, it's common for horrorcore to have a strong social conscience, often incorporating elements of Christian redemption, portraying the protagonists as Dark Shepherds, or allegorising the misery of being a criminal, drug addict, or victim of injustice. Due to horrorcore allowing protagonists to be irredeemable and often fantastical, it avoids the Do Not Do This Cool Thing problem that has been known to occur with Gangsta Rap. It also allows it to be much funnier than conventional gangsta rap, with quite a lot of the genre aiming to be satirical and cartoonish as much as it is scary.

In the 2010s, this split into two main strains. The dominant style from 2009-2013 was a lyrical shock-rap style based around describing the most extreme, sensationalist, and darkly comedic scenarios possible, often with exploitative celebrity namedrops, explicit drug use, Rap Rock elements, and political incorrectness used for shock value, a style popularised by Eminem's 2009 Cult Classic Relapse and the early work of OFWGKTA. From 2014, this fell out of favor for the "SoundCloud horrorcore" or "Memphis horrorcore" style influenced by early Three 6 Mafia and popularised by SpaceGhostPurrp - a less lyrical, more lo-fi and 'vibe'-driven style frequently mixed with Emo Rap, as best exemplified by $UICIDEBOY$ and Ghostemane.

While horrorcore artists can and do come from anywhere, the genre is generally associated with Memphis and the Midwest — in particular Detroit, one of the only rap scenes in America where the horrorcore style is so dominant that most emcees will at least dabble in it. The reason for Detroit's love of horrorcore is complex and related to Detroit's unique combination of racial segregation and urban decay, but can be traced back to the influence of Esham, who pioneered the idea of "acid rap" alter egos (meant to reflect Higher Understanding Through Drugs + Go Mad from the Revelation), and to Insane Clown Posse, who invested a lot of money and time into nurturing the local hip-hop scene to the extent that their mythology became widely adopted.

Could be said to be to Hardcore Hip Hop what Death Metal is to Thrash Metal. See also Gangsta Rap. The Memphis horrorcore style (popularized by Three Six Mafia) also wound up being a major influence on Crunk, mostly through its signature aggressive, insistent, and repetitive synth lines.

Artists in the genre include:

Record labels centered around this genre: