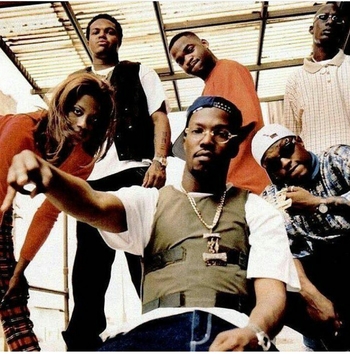 Remember when there were six of them?
Advertisement:

The group released their debut underground album Mystic Stylez in 1995 through Prophet Entertainment, a record label they created but have since relinquished control over. Their musical styles which initially featured eerie, slow, dark, menacing bass driven synth beats with equally gritty horror themed lyrics have since moved to a more mainstream sound. The group has also had numerous lineup changes and by the end of their initial run, only consisted of DJ Paul and Juicy J.

The constant line up changes and relatively drastic change in style has rubbed some fans the wrong way. When four of the six members left they took small portions of the fanbase with them. Now faced with the prospects that those members will likely never return (thanks to the way too personal disses flying back and forth) the base shattered into about a dozen pieces. To say nothing of the fact that their own popular artists left their own label (Hypnotized Minds) which caused even more division. DJ Paul and Juicy J have managed to keep the remaining core fans around mostly due to the fact that their beat making is for the most part still sharp as it was under the original line up, as that was one of the group's major draw. Nonetheless, they have cultivated a sizable and diverse cult following that has only increased since their Oscar win.

As of 2013 they have regrouped under a new name Da Mafia 6ix, minus Juicy J apparently due to legal issues with the old name and Juicy's contract. Unfortunately Lord Infamous passed away December 20, 2013 making a full reunion impossible. Adding insult to injury, Gangsta Boo quit the group...again over the summer of 2014, and Koopsta passed due to a brain aneurysm the following year on October 9.

In early 2020, the living members of the group reunited once again for live performances.