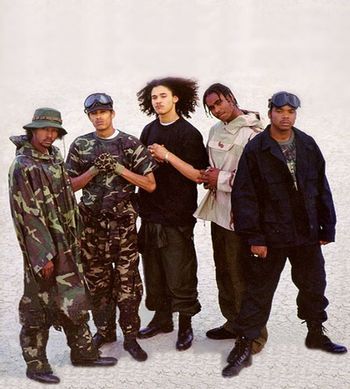 Bone Thugs-n-Harmony is an American hip hop group from the Glenville section of Cleveland. They are best known for their fusion of high-speed melodic, rhythmic rapping and harmonizing vocals. In 1997, the group was awarded the Grammy Award for Best Rap Performance with their song "Tha Crossroads". Since its conception in the early 1990s the group has been honored with numerous other awards.

Formed in the early '90s, their first album, Faces of Death, was recorded in 1993 under the name B.O.N.E. Enterpri$e. Their career took off after heading to Los Angeles in search of famous producer and N.W.A member Eazy-E. In hopes of securing a record deal, the group was given an audition over the phone receiving an unfulfilled promise from Eazy to call them back. Discovering that Eazy-E was performing back in their hometown of Cleveland, the group took a charter bus back hoping to have another chance, this time in person. The chance was given backstage as they auditioned, which resulted in them signing a contract with Ruthless Records.

Bone's music covers themes of redemption, inner city struggles, spirituality, occult mysticism, salvation, religious symbolism, and judgment of mankind. Even during the Faces of Death era the group had heavy religious overtones and symbolism. Their music also shows influence from the Book of Revelation and The Art of War.

Since the Turn of the Millennium the group has teetered on the brink of collapse, with constant infighting and disputes with labels. Things finally fell apart after the release of The World's Enemy, an album that neither the group nor the fans liked. The final nail in the coffin was when the group asked Krayzie to leave (or Krayzie himself decided to leave; there's disagreement about what happened), which was followed by Wish Bone leaving too. There was talk of a new album with the remaining three, but in an August 2011 interview Flesh N Bone claimed the group was finished. In May 2012, however, all five were headlining the "Rock the Bells Tour". Despite their difficulties, the group have grown something of a cult following in their later years. The group also made an appearance during Jamie Kennedy's infamous New Year's Eve 2013 special aired by an independent station near Los Angeles.

The group consists of five members:

See you at the crossroads, where you won't be lonely!

See you at the crossroads, where you won't be lonely!