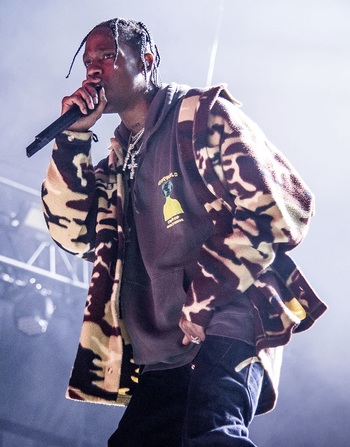 It's lit!
Influences: Björk, Portishead, Bon Iver, The Fray, Little Dragon, Kid Cudi, M.I.A., The Sex Pistols, Gym Class Heroes, Kanye West, Toro y Moi, Tame Impala, T.I., Radiohead, Future, Chief Keef, Tyler, the Creator, DJ Screw, Three 6 Mafia
Nine light-years away, just outside of the Kepler solar system, we find ourselves consumed and utterly mesmerized with a story of a young rebel against the system refusing to conform or comply to the ways of authority. He chose the mood of "Fuck this shit." At that moment, the one known as Jacques turned to Scott, chose to jump off his mama porch, leading the stampede of lost souls in the middle of their metamorphosis, not quite through with their journey. Ain't made it to wherever the fuck they gon' be in life, but wherever it is, it's better than here, so fuck you, and fuck this.
—Opening Narration of Rodeo, courtesy of T.I.
Advertisement:

He's known for his highly detailed, psychedelic trap production, often making use of phasing, delays, and lo-fi/ambient textures, with the two main staples of his sound being his idiosyncratic use of Auto-Tune and his frequent mentions of drugs, mostly codeine and marijuana.

He is currently dating Kylie Jenner after a brief separation; the pair have a daughter, Stormi Webster, and are expecting another.

On November 5, 2021, during a performance at Astroworld (an annual Houston-based music festival which Scott created and ran, named after his album of the same name), ten people died of a crowd crush.

Hundreds more were injured. Travis Scott has since become a pariah in the music industry, with many pointing to his own poor planning and encouragement of reckless behavior as key factors in the disaster.

Birds in the Tropes Sing McKnight: