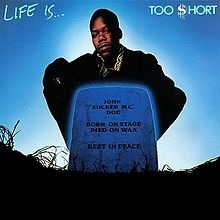 Too $hort, also known as Short Dog (real name Todd Anthony Shaw, born April 28, 1966) is a rap artist from Oakland, California. Born in 1966, Shaw started rapping in the early eighties, turning up in clubs and selling personalized rap tapes to his classmates. Too $hort is best known for making explicit rap songs about sex, but he does a bit of political rapping as well.