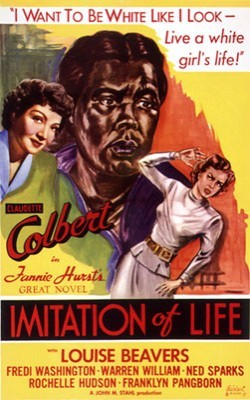 Imitation of Life is a 1934 drama film directed by John M. Stahl and starring Claudette Colbert. It examines racism in a way that was very daring for a film made in The '30s.

Bea Pullman (Colbert) is a recent widow who is struggling to raise her toddler daughter Jessie and keep up her late husband's business selling maple syrup. A chance encounter leads to Delilah Johnson (Louise Beavers), a black housekeeper, and her very white-skinned daughter Peola moving in with the Pullmans, with Delilah keeping house in exchange for room and board. Delilah's skill with making pancakes gives Bea an idea, and the two women wind up opening a breakfast diner specializing in pancakes. The pancake joint does well, but after a customer suggests to Bea that she merchandises the pancakes, Bea winds up as the owner of a highly successful business selling "Aunt Delilah's Pancake Mix" nationwide.

Delilah for her part is content to stay with Bea and take care of their little family, although Bea insists on putting money in the bank for her. Her daughter Peola, meanwhile, is light-skinned enough to pass as white and grows to resent her mother for identifying her as black and holding her back socially. While Delilah struggles with Peola, Bea, now a wealthy businesswoman, falls in love with Steve Archer (Warren William), a handsome, charming ichthyologist—but so does a now grown-up Jessie.

Based on a novel by Fannie Hurst. Another film version was released in 1959, directed by Douglas Sirk and starring Lana Turner.