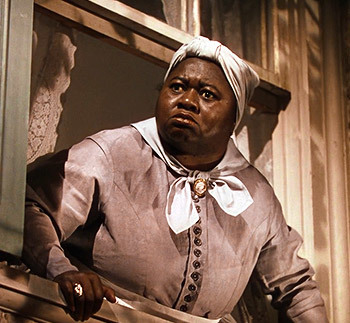 Hattie McDaniel as Mammy from Gone with the Wind, the Trope Codifier.
"Yes, of course, the mammy did exist—once. For at least two centuries she was an institution of the Old South. Even today—here and there—one can be found. But today the Old South as we knew it is disappearing and mammy is rapidly passing away with her. Today—mammy has become largely a fiction—a museum piece of slavery days. Yes—it's true that mammy—the epitome of the patient, contented slave—doesn't live here any more!"
— New World A-Comin' (1944 radio series), "The Negro Domestic"
Advertisement:

Older Than Radio, Subtrope of Ethnic Menial Labor, Mammy was born in the Deep South of Antebellum America, but continued to be a presence for a century after the American Civil War and is also "popular" in Cuba. During slavery, she was largely resigned to her enslavement, perhaps even finding Happiness in Slavery. After she gained her freedom, Mammy continued to serve as a menial domestic to whites and continued to aspire to little higher. In her freedom, she may have also moved north, although her position and character are largely unchanged whether she lives in rural Georgia or Chicago.

Physically, Mammy is generally overweight, middle-aged or older, and has no expressed sexuality; a white mistress was supposedly secure that having Mammy about the house was no threat to her husband's fidelity as opposed to a younger, prettier maid. In terms of character, Mammy is poorly educated but has abundant common sense and is competent in her domestic duties. She is servile toward the whites, but may be an Apron Matron toward her own family, or even toward her masters' children if they have placed her in authority over the kids. Her earthy common sense may, if her white masters or employers become sufficiently zany, lead her to become the Only Sane Man of the household and develop some characteristics of a Sassy Black Woman, perhaps even being driven to deliver a Whoopi Epiphany Speech.

Compare Magical Negro and Almighty Janitor. May also be the maid of a Maid and Maiden duo. The white family she works for may fall under Bad Boss or Pointy-Haired Boss, but don't expect the story to call them on it.

The Other Wiki has a page on the archetype here.

Given the character's association with Minstrel Shows and racist stereotypes, many people find Unfortunate Implications in it, especially if she expresses Happiness in Slavery or has no other role than to serve white people. However, more complex works may interrogate the type further by making her more well-rounded as a person or showing how she strives to be a positive mother figure in a bad situation.

If the story is set in Texas or California, she might be Hispanic or Native American. In the Northeast, she might be Irish, and in the Midwest Swedish or Norwegian. In stories set in The Raj she might be Indian or Chinese (and more likely than not referred to as Ayah or Amah, respectively). The archetype can also be applied to characters that are simply "black coded": that is, people who are treated in the setting the same way real life black people are.

Not to be mistaken for someone referring to their actual mother as Mammy. "Mammy" and "Mam" are the usual familiar terms for one's mother in Ireland, as well as parts of Wales and the North of England, rather than "Mum" or "Mom". In Mrs. Brown's Boys, for instance, Agnes Brown is always addressed as Mammy or Ma.

Mammy helps Scarlett get ready for the barbecue at Twelve Oaks

Mammy helps Scarlett get ready for the barbecue at Twelve Oaks