Film / The House of Rothschild 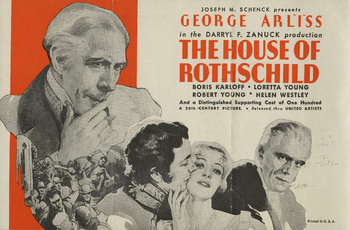 The House of Rothschild is a 1934 film directed by Alfred L. Werker.

It is a fictionalized re-telling of the rise of the Rothschilds, who pioneered international banking in Europe. The film opens in 1780 as family patriarch Meyer Rothschild (George Arliss) has established a prosperous trading business, but is still forced to live in a ghetto in Frankfurt, where he has to bribe antisemitic tax collectors. He manages to pay off the tax man but suffers a dreadful reversal when ten thousand gulden is stolen by bandits before he can receive it. A bitter Meyer tells his five sons to establish banking houses throughout Europe, to reduce the need for risky cash transfers, and also to enrich themselves as much as possible, because Jews need money to protect themselves in an antisemitic Europe.

Cut forward 32 years, and the Rothschild sons, led by the eldest, Nathan (also played by Arliss) have succeeded in founding five famous banking houses. The Rothschilds, working together, issue loans to the anti-Napoleon alliance, and the emperor of the French is defeated and exiled to Elba. Still, however, the Rothschilds are shunned and discriminated against by European high society, much to Nathan's bitterness.

A most unusual film for its era, directly addressing antisemitism in a manner that Hollywood otherwise simply never did: the Rothschilds live in a ghetto, they are persecuted and oppressed, and Meyer talks about how Jews are forced to work as merchants and moneylenders because Christian Europe won't let them own land or work a trade. American cinema wouldn't take the subject of antisemitism up so directly again until Gentleman's Agreement in 1947. Nazi Germany, meanwhile, made an antisemitic movie in 1940, Die Rothschilds.